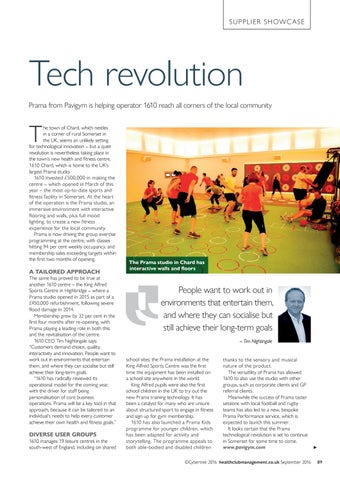 he town of Chard, which nestles in a corner of rural Somerset in the UK, seems an unlikely setting for technological innovation – but a quiet revolution is nevertheless taking place in the town’s new health and fitness centre, 1610 Chard, which is home to the UK’s largest Prama studio. 1610 invested £500,000 in making the centre – which opened in March of this year – the most up-to-date sports and fitness facility in Somerset. At the heart of the operation is the Prama studio, an immersive environment with interactive flooring and walls, plus full mood lighting, to create a new fitness experience for the local community. Prama is now driving the group exercise programming at the centre, with classes hitting 94 per cent weekly occupancy, and membership sales exceeding targets within the first two months of opening.

The same has proved to be true at another 1610 centre – the King Alfred Sports Centre in Highbridge – where a Prama studio opened in 2015 as part of a £450,000 refurbishment, following severe flood damage in 2014. Membership grew by 32 per cent in the first four months after re-opening, with Prama playing a leading role in both this and the revitalisation of the centre. 1610 CEO Tim Nightingale says: “Customers demand choice, quality, interactivity and innovation. People want to work out in environments that entertain them, and where they can socialise but still achieve their long-term goals. “1610 has radically reviewed its operational model for the coming year, with the driver for staff being personalisation of core business operations. Prama will be a key tool in that approach, because it can be tailored to an individual’s needs to help every customer achieve their own health and fitness goals.”

1610 manages 19 leisure centres in the south-west of England, including on shared

The Prama studio in Chard has interactive walls and floors

People want to work out in environments that entertain them, and where they can socialise but still achieve their long-term goals – Tim Nightingale school sites; the Prama installation at the King Alfred Sports Centre was the first time the equipment has been installed on a school site anywhere in the world. King Alfred pupils were also the first school children in the UK to try out the new Prama training technology. It has been a catalyst for many who are unsure about structured sport to engage in fitness and sign up for gym membership. 1610 has also launched a Prama Kids programme for younger children, which has been adapted for activity and storytelling. The programme appeals to both able-bodied and disabled children

thanks to the sensory and musical nature of the product. The versatility of Prama has allowed 1610 to also use the studio with other groups, such as corporate clients and GP referral clients. Meanwhile the success of Prama taster sessions with local football and rugby teams has also led to a new, bespoke Prama Performance service, which is expected to launch this summer. It looks certain that the Prama technological revolution is set to continue in Somerset for some time to come. www.pavigym.com