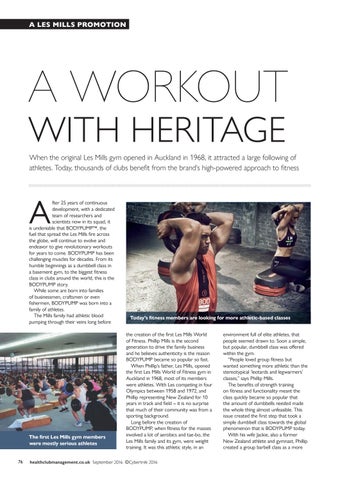 A WORKOUT WITH HERITAGE

When the original Les Mills gym opened in Auckland in 1968, it attracted a large following of athletes. Today, thousands of clubs benefit from the brand's high-powered approach to fitness

fter 25 years of continuous development, with a dedicated team of researchers and scientists now in its squad, it is undeniable that BODYPUMP™, the fuel that spread the Les Mills fire across the globe, will continue to evolve and endeavor to give revolutionary workouts for years to come. BODYPUMP has been challenging muscles for decades. From its humble beginnings as a dumbbell class in a basement gym, to the biggest fitness class in clubs around the world, this is the BODYPUMP story. While some are born into families of businessmen, craftsmen or even fishermen, BODYPUMP was born into a family of athletes. The Mills family had athletic blood pumping through their veins long before

Today's fitness members are looking for more athletic-based classes the creation of the first Les Mills World of Fitness. Phillip Mills is the second generation to drive the family business and he believes authenticity is the reason BODYPUMP became so popular so fast. When Phillip’s father, Les Mills, opened the first Les Mills World of Fitness gym in Auckland in 1968, most of its members were athletes. With Les competing in four Olympics between 1958 and 1972, and Phillip representing New Zealand for 10 years in track and field – it is no surprise that much of their community was from a sporting background. Long before the creation of BODYPUMP, when fitness for the masses involved a lot of aerobics and tae-bo, the Les Mills family and its gym, were weight training. It was this athletic style, in an

environment full of elite athletes, that people seemed drawn to. Soon a simple, but popular, dumbbell class was oﬀered within the gym. “People loved group fitness but wanted something more athletic than the stereotypical ‘leotards and legwarmers’ classes,” says Phillip Mills. The benefits of strength training on fitness and functionality meant the class quickly became so popular that the amount of dumbbells needed made the whole thing almost unfeasible. This issue created the first step that took a simple dumbbell class towards the global phenomenon that is BODYPUMP today. With his wife Jackie, also a former New Zealand athlete and gymnast, Phillip created a group barbell class as a more