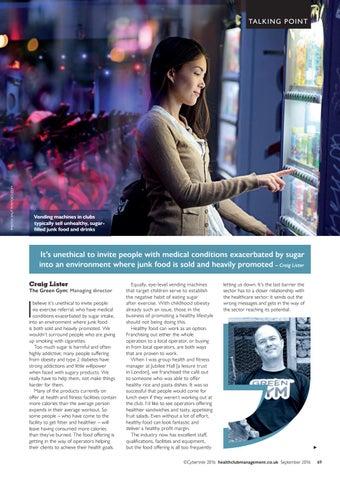 believe it’s unethical to invite people via exercise referral, who have medical conditions exacerbated by sugar intake, into an environment where junk food is both sold and heavily promoted. We wouldn’t surround people who are giving up smoking with cigarettes. Too much sugar is harmful and often highly addictive; many people suﬀering from obesity and type 2 diabetes have strong addictions and little willpower when faced with sugary products. We really have to help them, not make things harder for them. Many of the products currently on oﬀer at health and fi tness facilities contain more calories than the average person expends in their average workout. So some people – who have come to the facility to get fi tter and healthier – will leave having consumed more calories than they’ve burned. The food oﬀering is getting in the way of operators helping their clients to achieve their health goals.

Equally, eye-level vending machines that target children serve to establish the negative habit of eating sugar after exercise. With childhood obesity already such an issue, those in the business of promoting a healthy lifestyle should not being doing this. Healthy food can work as an option. Franchising out either the whole operation to a local operator, or buying in from local operators, are both ways that are proven to work. When I was group health and fi tness manager at Jubilee Hall [a leisure trust in London], we franchised the café out to someone who was able to oﬀer healthy rice and pasta dishes. It was so successful that people would come for lunch even if they weren’t working out at the club. I’d like to see operators oﬀering healthier sandwiches and tasty, appetising fruit salads. Even without a lot of eﬀort, healthy food can look fantastic and deliver a healthy profi t margin. The industry now has excellent staﬀ, qualifications, facilities and equipment, but the food oﬀering is all too frequently

letting us down. It’s the last barrier the sector has to a closer relationship with the healthcare sector: it sends out the wrong messages and gets in the way of the sector reaching its potential.