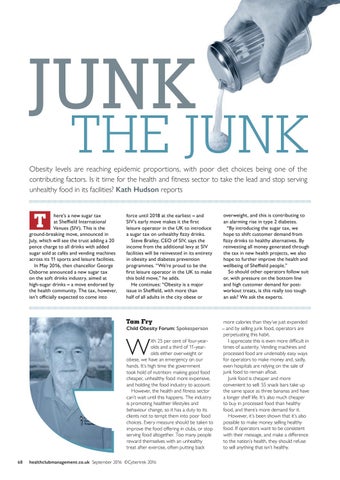 Obesity levels are reaching epidemic proportions, with poor diet choices being one of the contributing factors. Is it time for the health and fitness sector to take the lead and stop serving unhealthy food in its facilities? Kath Hudson reports

here’s a new sugar tax at Sheﬃeld International Venues (SIV). This is the ground-breaking move, announced in July, which will see the trust adding a 20 pence charge to all drinks with added sugar sold at cafés and vending machines across its 11 sports and leisure facilities. In May 2016, then chancellor George Osborne announced a new sugar tax on the soft drinks industry, aimed at high-sugar drinks – a move endorsed by the health community. The tax, however, isn’t oﬃcially expected to come into

force until 2018 at the earliest – and SIV’s early move makes it the first leisure operator in the UK to introduce a sugar tax on unhealthy fizzy drinks. Steve Brailey, CEO of SIV, says the income from the additional levy at SIV facilities will be reinvested in its entirety in obesity and diabetes prevention programmes. “We’re proud to be the first leisure operator in the UK to make this bold move,” he adds. He continues: “Obesity is a major issue in Sheﬃeld, with more than half of all adults in the city obese or

overweight, and this is contributing to an alarming rise in type 2 diabetes. “By introducing the sugar tax, we hope to shift customer demand from fizzy drinks to healthy alternatives. By reinvesting all money generated through the tax in new health projects, we also hope to further improve the health and wellbeing of Sheﬃeld people.” So should other operators follow suit or, with pressure on the bottom line and high customer demand for postworkout treats, is this really too tough an ask? We ask the experts.

more calories than they’ve just expended – and by selling junk food, operators are perpetuating this habit. I appreciate this is even more diﬃcult in times of austerity. Vending machines and processed food are undeniably easy ways for operators to make money and, sadly, even hospitals are relying on the sale of junk food to remain afloat. Junk food is cheaper and more convenient to sell: 55 snack bars take up the same space as three bananas and have a longer shelf life. It’s also much cheaper to buy in processed food than healthy food, and there’s more demand for it. However, it’s been shown that it’s also possible to make money selling healthy food. If operators want to be consistent with their message, and make a diﬀerence to the nation’s health, they should refuse to sell anything that isn’t healthy.

ith 25 per cent of four-yearolds and a third of 11-yearolds either overweight or obese, we have an emergency on our hands. It’s high time the government took hold of nutrition: making good food cheaper, unhealthy food more expensive, and holding the food industry to account. However, the health and fitness sector can’t wait until this happens. The industry is promoting healthier lifestyles and behaviour change, so it has a duty to its clients not to tempt them into poor food choices. Every measure should be taken to improve the food oﬀering in clubs, or stop serving food altogether. Too many people reward themselves with an unhealthy treat after exercise, often putting back