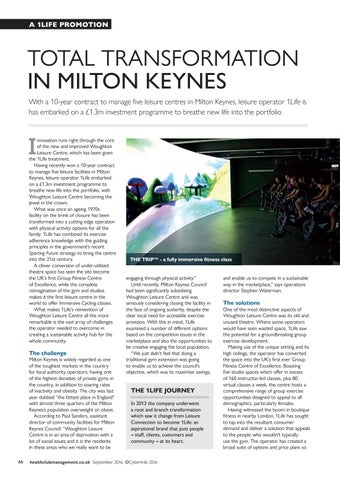 TOTAL TRANSFORMATION IN MILTON KEYNES With a 10-year contract to manage five leisure centres in Milton Keynes, leisure operator 1Life is has embarked on a £1.3m investment programme to breathe new life into the portfolio

nnovation runs right through the core of the new and improved Woughton Leisure Centre, which has been given the 1Life treatment. Having recently won a 10-year contract to manage five leisure facilities in Milton Keynes, leisure operator 1Life embarked on a £1.3m investment programme to breathe new life into the portfolio, with Woughton Leisure Centre becoming the jewel in the crown. What was once an ageing 1970s facility on the brink of closure has been transformed into a cutting edge operation with physical activity options for all the family. 1Life has combined its exercise adherence knowledge with the guiding principles in the government’s recent Sporting Future strategy to bring the centre into the 21st century. A clever conversion of under-utilised theatre space has seen the site become the UK’s first Group Fitness Centre of Excellence, while the complete reimagination of the gym and studios makes it the first leisure centre in the world to oﬀer Immersive Cycling classes. What makes 1Life’s reinvention of Woughton Leisure Centre all the more remarkable is the vast array of challenges the operator needed to overcome in creating a sustainable activity hub for the whole community.

Milton Keynes is widely regarded as one of the toughest markets in the country for local authority operators, having one of the highest densities of private gyms in the country, in addition to soaring rates of inactivity and obesity. The city was last year dubbed “the fattest place in England” with almost three quarters of the Milton Keynes’s population overweight or obese. According to Paul Sanders, assistant director of community facilities for Milton Keynes Council: “Woughton Leisure Centre is in an area of deprivation with a lot of social issues and it is the residents in these areas who we really want to be 66

THE TRIP™ - a fully immersive fitness class engaging through physical activity.” Until recently, Milton Keynes Council had been significantly subsidising Woughton Leisure Centre and was seriously considering closing the facility in the face of ongoing austerity, despite the clear local need for accessible exercise provision. With this in mind, 1Life examined a number of diﬀerent options based on the competition issues in the marketplace and also the opportunities to be creative engaging the local population. “We just didn't feel that doing a traditional gym extension was going to enable us to achieve the council's objective, which was to maximise savings,

THE 1LIFE JOURNEY In 2013 the company underwent a root and branch transformation which saw it change from Leisure Connection to become 1Life: an aspirational brand that puts people – staﬀ, clients, customers and community – at its heart.

and enable us to compete in a sustainable way in the marketplace,” says operations director Stephen Waterman.

One of the most distinctive aspects of Woughton Leisure Centre was its old and unused theatre. Where some operators would have seen wasted space, 1Life saw the potential for a groundbreaking group exercise development. Making use of the unique setting and its high ceilings, the operator has converted the space into the UK’s first ever Group Fitness Centre of Excellence. Boasting five studio spaces which oﬀer in excess of 160 instructor-led classes, plus 80 virtual classes a week, the centre hosts a comprehensive range of group exercise opportunities designed to appeal to all demographics, particularly females. Having witnessed the boom in boutique fitness in nearby London, 1Life has sought to tap into the resultant consumer demand and deliver a solution that appeals to the people who wouldn't typically use the gym. The operator has created a broad suite of options and price plans so