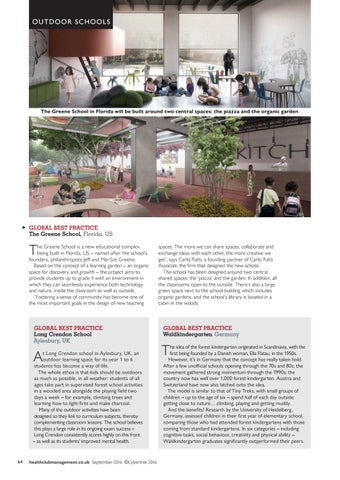 The Greene School in Florida will be built around two central spaces: the piazza and the organic garden

he Greene School is a new educational complex being built in Florida, US – named after the school’s founders, philanthropists Jeﬀ and Mei Sze Greene. Based on the concept of a learning garden – an organic space for discovery and growth – the project aims to provide students up to grade 4 with an environment in which they can seamlessly experience both technology and nature, inside the classroom as well as outside. “Fostering a sense of community has become one of the most important goals in the design of new teaching

t Long Crendon school in Aylesbury, UK, an outdoor learning space for its year 1 to 6 students has become a way of life. The whole ethos is that kids should be outdoors as much as possible, in all weather: students of all ages take part in supervised forest school activities in a wooded area alongside the playing field two days a week – for example, climbing trees and learning how to light fires and make charcoal. Many of the outdoor activities have been designed so they link to curriculum subjects, thereby complementing classroom lessons. The school believes this plays a large role in its ongoing exam success – Long Crendon consistently scores highly on this front – as well as its students’ improved mental health.

spaces. The more we can share spaces, collaborate and exchange ideas with each other, the more creative we get”, says Carlo Ratti, a founding partner of Carlo Ratti Associati, the firm that designed the new school. The school has been designed around two central shared spaces: the ‘piazza’ and the garden. In addition, all the classrooms open to the outside. There’s also a large green space next to the school building which includes organic gardens, and the school’s library is located in a cabin in the woods.

he idea of the forest kindergarten originated in Scandinavia, with the first being founded by a Danish woman, Ella Flatau, in the 1950s. However, it’s in Germany that the concept has really taken hold. After a few unoﬃcial schools opening through the 70s and 80s, the movement gathered strong momentum through the 1990s; the country now has well over 1,000 forest kindergarten. Austria and Switzerland have now also latched onto the idea. The model is similar to that of Tiny Treks, with small groups of children – up to the age of six – spend half of each day outside getting close to nature… climbing, playing and getting muddy. And the benefits? Research by the University of Heidelberg, Germany, assessed children in their first year of elementary school, comparing those who had attended forest kindergartens with those coming from standard kindergartens. In six categories – including cognitive tasks, social behaviour, creativity and physical ability – Waldkindergarten graduates significantly outperformed their peers.