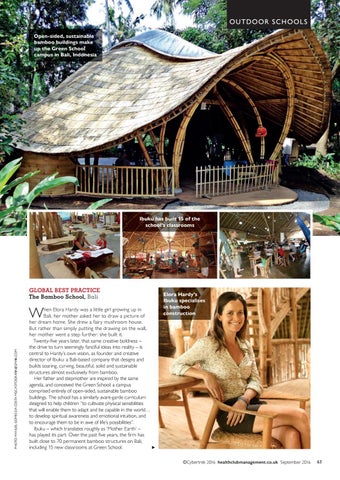 Ibuku has built 15 of the school’s classrooms

hen Elora Hardy was a little girl growing up in Bali, her mother asked her to draw a picture of her dream home. She drew a fairy mushroom house. But rather than simply putting the drawing on the wall, her mother went a step further: she built it. Twenty-five years later, that same creative boldness – the drive to turn seemingly fanciful ideas into reality – is central to Hardy’s own vision, as founder and creative director of Ibuku: a Bali-based company that designs and builds soaring, curving, beautiful, solid and sustainable structures almost exclusively from bamboo. Her father and stepmother are inspired by the same agenda, and conceived the Green School: a campus comprised entirely of open-sided, sustainable bamboo buildings. The school has a similarly avant-garde curriculum designed to help children “to cultivate physical sensibilities that will enable them to adapt and be capable in the world… to develop spiritual awareness and emotional intuition, and to encourage them to be in awe of life’s possibilities”. Ibuku – which translates roughly as ‘Mother Earth’ – has played its part. Over the past five years, the firm has built close to 70 permanent bamboo structures on Bali, including 15 new classrooms at Green School.