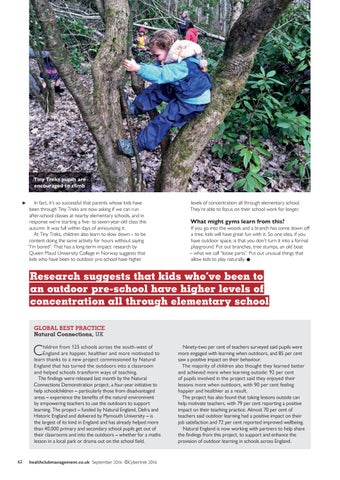 Tiny Treks pupils are encouraged to climb In fact, it’s so successful that parents whose kids have been through Tiny Treks are now asking if we can run after-school classes at nearby elementary schools, and in response we’re starting a five- to seven-year-old class this autumn. It was full within days of announcing it. At Tiny Treks, children also learn to slow down – to be content doing the same activity for hours without saying “I’m bored”. That has a long-term impact: research by Queen Maud University College in Norway suggests that kids who have been to outdoor pre-school have higher

levels of concentration all through elementary school. They’re able to focus on their school work for longer.

If you go into the woods and a branch has come down oﬀ a tree, kids will have great fun with it. So one idea, if you have outdoor space, is that you don’t turn it into a formal playground. Put out branches, tree stumps, an old boat – what we call “loose parts”. Put out unusual things that allow kids to play naturally. ●

Research suggests that kids who’ve been to an outdoor pre-school have higher levels of concentration all through elementary school GLOBAL BEST PRACTICE Natural Connections, UK

hildren from 125 schools across the south-west of England are happier, healthier and more motivated to learn thanks to a new project commissioned by Natural England that has turned the outdoors into a classroom and helped schools transform ways of teaching. The findings were released last month by the Natural Connections Demonstration project, a four-year initiative to help schoolchildren – particularly those from disadvantaged areas – experience the benefits of the natural environment by empowering teachers to use the outdoors to support learning. The project – funded by Natural England, Defra and Historic England and delivered by Plymouth University – is the largest of its kind in England and has already helped more than 40,000 primary and secondary school pupils get out of their classrooms and into the outdoors – whether for a maths lesson in a local park or drama out on the school field.

Ninety-two per cent of teachers surveyed said pupils were more engaged with learning when outdoors, and 85 per cent saw a positive impact on their behaviour. The majority of children also thought they learned better and achieved more when learning outside: 92 per cent of pupils involved in the project said they enjoyed their lessons more when outdoors, with 90 per cent feeling happier and healthier as a result. The project has also found that taking lessons outside can help motivate teachers, with 79 per cent reporting a positive impact on their teaching practice. Almost 70 per cent of teachers said outdoor learning had a positive impact on their job satisfaction and 72 per cent reported improved wellbeing. Natural England is now working with partners to help share the findings from this project, to support and enhance the provision of outdoor learning in schools across England.