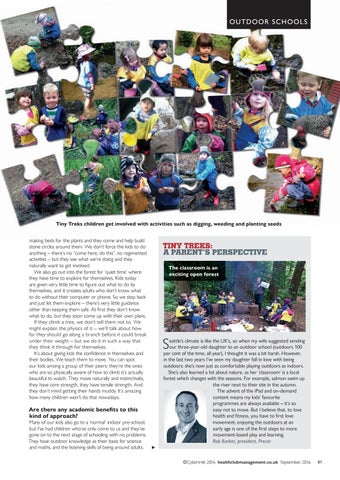 Tiny Treks children get involved with activities such as digging, weeding and planting seeds making beds for the plants and they come and help build stone circles around them. We don’t force the kids to do anything – there’s no “come here, do this”, no regimented activities – but they see what we’re doing and they naturally want to get involved. We also go out into the forest for ‘quiet time’ where they have time to explore for themselves. Kids today are given very little time to figure out what to do by themselves, and it creates adults who don’t know what to do without their computer or phone. So we step back and just let them explore – there’s very little guidance other than keeping them safe. At first they don’t know what to do, but they soon come up with their own plans. If they climb a tree, we don’t tell them not to. We might explain the physics of it – we’ll talk about how far they should go along a branch before it could break under their weight – but we do it in such a way that they think it through for themselves. It’s about giving kids the confidence in themselves and their bodies. We teach them to move. You can spot our kids among a group of their peers: they’re the ones who are so physically aware of how to climb it’s actually beautiful to watch. They move naturally and instinctively, they have core strength, they have tensile strength. And they don’t mind getting their hands muddy. It’s amazing how many children won’t do that nowadays.

Are there any academic benefits to this kind of approach?

Many of our kids also go to a ‘normal’ indoor pre-school, but I’ve had children who’ve only come to us and they’ve gone on to the next stage of schooling with no problems. They have outdoor knowledge as their basis for science and maths, and the listening skills of being around adults.

TINY TREKS: A PARENT’S PERSPECTIVE The classroom is an exciting open forest

eattle’s climate is like the UK’s, so when my wife suggested sending our three-year-old daughter to an outdoor school (outdoors 100 per cent of the time, all year), I thought it was a bit harsh. However, in the last two years I’ve seen my daughter fall in love with being outdoors: she’s now just as comfortable playing outdoors as indoors. She’s also learned a lot about nature, as her ‘classroom’ is a local forest which changes with the seasons. For example, salmon swim up the river next to their site in the autumn. The advent of the iPad and on-demand content means my kids’ favourite programmes are always available – it’s so easy not to move. But I believe that, to love health and fitness, you have to first love movement; enjoying the outdoors at an early age is one of the first steps to more movement-based play and learning. Rob Barker, president, Precor