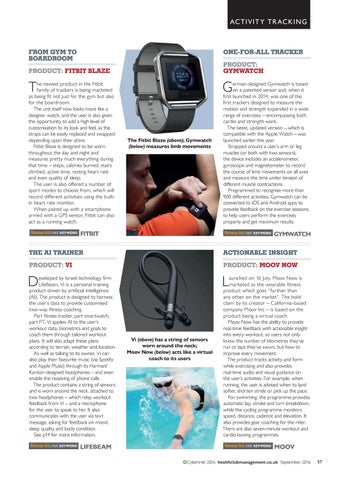 FROM GYM TO BOARDROOM

he newest product in the Fitbit family of trackers is being marketed as being fi t not just for the gym but also for the boardroom. The unit itself now looks more like a designer watch, and the user is also given the opportunity to add a high level of customisation to its look and feel, as the straps can be easily replaced and swapped depending upon their attire. Fitbit Blaze is designed to be worn throughout the day and night and measures pretty much everything during that time – steps, calories burned, stairs climbed, active time, resting heart rate and even quality of sleep. The user is also oﬀered a number of sport modes to choose from, which will record diﬀerent activities using the builtin heart rate monitor. When paired up with a smartphone armed with a GPS sensor, Fitbit can also act as a running watch. fitness-kit.net KEYWORD

The Fitbit Blaze (above); Gymwatch (below) measures limb movements

erman-designed Gymwatch is based on a patented sensor and, when it first launched in 2014, was one of the first trackers designed to measure the motion and strength expended in a wide range of exercises – encompassing both cardio and strength work. The latest, updated version – which is compatible with the Apple Watch – was launched earlier this year. Strapped around a user’s arm or leg muscles (or both with two sensors), the device includes an accelerometer, gyroscope and magnetometer to record the course of limb movements on all axes and measure the time under tension of diﬀerent muscle contractions. Programmed to recognise more than 900 diﬀerent activities, Gymwatch can be connected to iOS and Android apps to provide feedback on the exercise sessions, to help users perform the exercises properly and get maximum results. fitness-kit.net KEYWORD

eveloped by Israeli technology firm LifeBeam, Vi is a personal training product driven by artificial intelligence (AI). The product is designed to harness the user’s data to provide customised two-way fi tness coaching. Part fitness tracker, part smartwatch, part PT, Vi applies AI to the user’s workout data, biometrics and goals to coach them through tailored workout plans. It will also adapt these plans according to terrain, weather and location. As well as talking to its owner, Vi can also play their favourite music (via Spotify and Apple Music) through its Harman/ Kardon-designed headphones – and even enable the receiving of phone calls. The product contains a string of sensors and is worn around the neck, attached to two headphones – which relay workout feedback from Vi – and a microphone for the user to speak to her. It also communicates with the user via text message, asking for feedback on mood, sleep quality and body condition. See p14 for more information. fitness-kit.net KEYWORD

Vi (above) has a string of sensors worn around the neck; Moov Now (below) acts like a virtual coach to its users

aunched on 16 July, Moov Now is marketed as the wearable fitness product which goes “further than any other on the market”. The bold claim by its creator – California-based company Moov Inc – is based on the product being a virtual coach. Moov Now has the ability to provide real-time feedback with actionable insight into every workout, so users not only know the number of kilometres they’ve run or laps they’ve swum, but how to improve every movement. The product tracks activity and form while exercising and also provides real-time audio and visual guidance on the user’s activities. For example, when running, the user is advised when to land softer, shorten stride or pick up the pace. For swimming, the programme provides automatic lap, stroke and turn breakdown, while the cycling programme monitors speed, distance, cadence and elevation. It also provides gear coaching for the rider. There are also seven-minute workout and cardio boxing programmes. fitness-kit.net KEYWORD