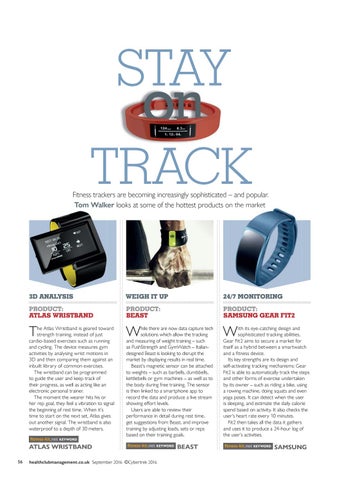 Fitness trackers are becoming increasingly sophisticated – and popular. Tom Walker looks at some of the hottest products on the market

he Atlas Wristband is geared toward strength training, instead of just cardio-based exercises such as running and cycling. The device measures gym activities by analysing wrist motions in 3D and then comparing them against an inbuilt library of common exercises. The wristband can be programmed to guide the user and keep track of their progress, as well as acting like an electronic personal trainer. The moment the wearer hits his or her rep goal, they feel a vibration to signal the beginning of rest time. When it’s time to start on the next set, Atlas gives out another signal. The wristband is also waterproof to a depth of 30 meters. fitness-kit.net KEYWORD

hile there are now data capture tech solutions which allow the tracking and measuring of weight training – such as PushStrength and GymWatch – Italiandesigned Beast is looking to disrupt the market by displaying results in real time. Beast’s magnetic sensor can be attached to weights – such as barbells, dumbbells, kettlebells or gym machines – as well as to the body during free training. The sensor is then linked to a smartphone app to record the data and produce a live stream showing eﬀort levels. Users are able to review their performance in detail during rest time, get suggestions from Beast, and improve training by adjusting loads, sets or reps based on their training goals. fitness-kit.net KEYWORD

ith its eye-catching design and sophisticated tracking abilities, Gear Fit2 aims to secure a market for itself as a hybrid between a smartwatch and a fi tness device. Its key strengths are its design and self-activating tracking mechanisms: Gear Fit2 is able to automatically track the steps and other forms of exercise undertaken by its owner – such as riding a bike, using a rowing machine, doing squats and even yoga poses. It can detect when the user is sleeping, and estimate the daily calorie spend based on activity. It also checks the user’s heart rate every 10 minutes. Fit2 then takes all the data it gathers and uses it to produce a 24-hour log of the user’s activities. fitness-kit.net KEYWORD