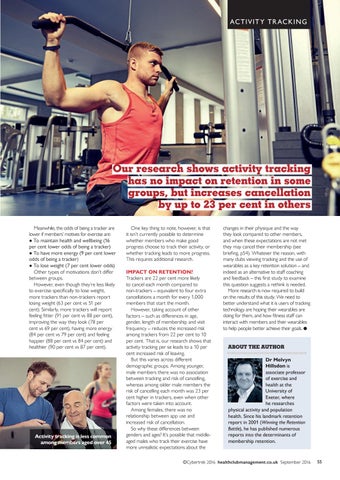 Activity tracking is less common among members aged over 45

One key thing to note, however, is that it isn’t currently possible to determine whether members who make good progress choose to track their activity, or whether tracking leads to more progress. This requires additional research. IMPACT ON RETENTION? Trackers are 22 per cent more likely to cancel each month compared to non-trackers – equivalent to four extra cancellations a month for every 1,000 members that start the month. However, taking account of other factors – such as diﬀerences in age, gender, length of membership and visit frequency – reduces the increased risk among trackers from 22 per cent to 10 per cent. That is, our research shows that activity tracking per se leads to a 10 per cent increased risk of leaving. But this varies across diﬀerent demographic groups. Among younger, male members there was no association between tracking and risk of cancelling, whereas among older male members the risk of cancelling each month was 23 per cent higher in trackers, even when other factors were taken into account. Among females, there was no relationship between app use and increased risk of cancellation. So why these diﬀerences between genders and ages? It’s possible that middleaged males who track their exercise have more unrealistic expectations about the

changes in their physique and the way they look compared to other members, and when these expectations are not met they may cancel their membership (see briefing, p54). Whatever the reason, with many clubs viewing tracking and the use of wearables as a key retention solution – and indeed as an alternative to staﬀ coaching and feedback – this first study to examine this question suggests a rethink is needed. More research is now required to build on the results of this study. We need to better understand what it is users of tracking technology are hoping their wearables are doing for them, and how fitness staﬀ can interact with members and their wearables to help people better achieve their goals. ● ABOUT THE AUTHOR Dr Melvyn Hillsdon is associate professor of exercise and health at the University of Exeter, where he researches physical activity and population health. Since his landmark retention report in 2001 (Winning the Retention Battle), he has published numerous reports into the determinants of membership retention.