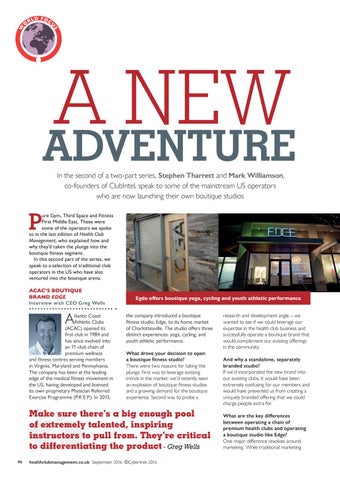 A NEW ADVENTURE In the second of a two-part series, Stephen Tharrett and Mark Williamson, co-founders of ClubIntel, speak to some of the mainstream US operators who are now launching their own boutique studios

ure Gym, Third Space and Fitness First Middle East. These were some of the operators we spoke to in the last edition of Health Club Management, who explained how and why they’d taken the plunge into the boutique fitness segment. In this second part of the series, we speak to a selection of traditional club operators in the US who have also ventured into the boutique arena. ACAC’S BOUTIQUE BRAND EDGE Interview with CEO Greg Wells

tlantic Coast Athletic Clubs (ACAC) opened its first club in 1984 and has since evolved into an 11-club chain of premium wellness and fitness centres serving members in Virginia, Maryland and Pennsylvania. The company has been at the leading edge of the medical fitness movement in the US, having developed and licensed its own proprietary Physician Referred Exercise Programme (P.R.E.P.). In 2015,

Make sure there’s a big enough pool of extremely talented, inspiring instructors to pull from. They’re critical to differentiating the product - Greg Wells 46

research and development angle – we wanted to see if we could leverage our expertise in the health club business and successfully operate a boutique brand that would complement our existing oﬀerings in the community. And why a standalone, separately branded studio? If we’d incorporated the new brand into our existing clubs, it would have been extremely confusing for our members and would have prevented us from creating a uniquely branded oﬀering that we could charge people extra for. What are the key diﬀerences between operating a chain of premium health clubs and operating a boutique studio like Edge? One major diﬀerence revolves around marketing. While traditional marketing