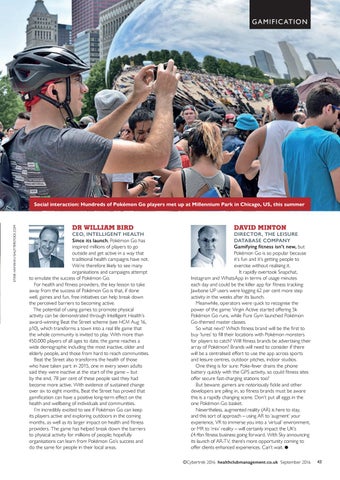 Social interaction: Hundreds of Pokémon Go players met up at Millennium Park in Chicago, US, this summer

CEO, INTELLIGENT HEALTH Since its launch, Pokémon Go has inspired millions of players to go outside and get active in a way that traditional health campaigns have not. We’re therefore likely to see many organisations and campaigns attempt to emulate the success of Pokémon Go. For health and fitness providers, the key lesson to take away from the success of Pokémon Go is that, if done well, games and fun, free initiatives can help break down the perceived barriers to becoming active. The potential of using games to promote physical activity can be demonstrated through Intelligent Health’s award-winning Beat the Street scheme (see HCM Aug 16, p10), which transforms a town into a real life game that the whole community is invited to play. With more than 450,000 players of all ages to date, the game reaches a wide demographic including the most inactive, older and elderly people, and those from hard to reach communities. Beat the Street also transforms the health of those who have taken part: in 2015, one in every seven adults said they were inactive at the start of the game – but by the end, 78 per cent of these people said they had become more active. With evidence of sustained change over six to eight months, Beat the Street has proved that gamification can have a positive long-term eﬀect on the health and wellbeing of individuals and communities. I’m incredibly excited to see if Pokémon Go can keep its players active and exploring outdoors in the coming months, as well as its larger impact on health and fitness providers. The game has helped break down the barriers to physical activity for millions of people; hopefully organisations can learn from Pokémon Go’s success and do the same for people in their local areas.

DIRECTOR, THE LEISURE DATABASE COMPANY Gamifying fitness isn’t new, but Pokémon Go is so popular because it’s fun and it’s getting people to exercise without realising it. It rapidly overtook Snapchat, Instagram and WhatsApp in terms of usage minutes each day and could be the killer app for fitness tracking: Jawbone UP users were logging 62 per cent more step activity in the weeks after its launch. Meanwhile, operators were quick to recognise the power of the game: Virgin Active started oﬀering 5k Pokémon Go runs, while Pure Gym launched Pokémon Go-themed master classes. So what next? Which fitness brand will be the first to buy ‘lures’ to fill their locations with Pokémon monsters for players to catch? Will fitness brands be advertising their array of Pokémon? Brands will need to consider if there will be a centralised eﬀort to use the app across sports and leisure centres, outdoor pitches, indoor studios. One thing is for sure: Poke-fever drains the phone battery quickly with the GPS activity, so could fitness sites oﬀer secure fast-charging stations too? But beware: gamers are notoriously fickle and other developers are piling in, so fitness brands must be aware this is a rapidly changing scene. Don’t put all eggs in the one Pokémon Go basket. Nevertheless, augmented reality (AR) is here to stay, and this sort of approach – using AR to ‘augment’ your experience, VR to immerse you into a ‘virtual’ environment, or MR to ‘mix’ reality – will certainly impact the UK’s £4.4bn fitness business going forward. With Sky announcing its launch of AR-TV, there’s more opportunity coming to oﬀer clients enhanced experiences. Can’t wait. ● ©Cybertrek 2016 healthclubmanagement.co.uk September 2016