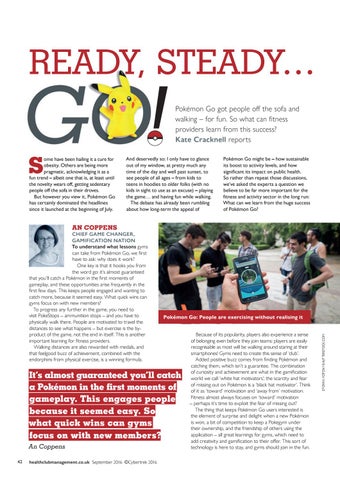 READY, STEADY… Pokémon Go got people oﬀ the sofa and walking – for fun. So what can fi tness providers learn from this success? Kate Cracknell reports

ome have been hailing it a cure for obesity. Others are being more pragmatic, acknowledging it as a fun trend – albeit one that is, at least until the novelty wears oﬀ, getting sedentary people oﬀ the sofa in their droves. But however you view it, Pokémon Go has certainly dominated the headlines since it launched at the beginning of July.

And deservedly so: I only have to glance out of my window, at pretty much any time of the day and well past sunset, to see people of all ages – from kids to teens in hoodies to older folks (with no kids in sight to use as an excuse) – playing the game… and having fun while walking. The debate has already been rumbling about how long-term the appeal of

Pokémon Go might be – how sustainable its boost to activity levels, and how significant its impact on public health. So rather than repeat those discussions, we’ve asked the experts a question we believe to be far more important for the fitness and activity sector in the long run: What can we learn from the huge success of Pokémon Go?

Pokémon Go: People are exercising without realising it

It’s almost guaranteed you’ll catch a Pokémon in the first moments of gameplay. This engages people because it seemed easy. So what quick wins can gyms focus on with new members? An Coppens 42

Because of its popularity, players also experience a sense of belonging even before they join teams: players are easily recognisable as most will be walking around staring at their smartphones! Gyms need to create this sense of ‘club’. Added positive buzz comes from finding Pokémon and catching them, which isn’t a guarantee. The combination of curiosity and achievement are what in the gamification world we call ‘white hat motivators’; the scarcity and fear of missing out on Pokémon is a ‘black hat motivator’. Think of it as ‘toward’ motivation and ‘away from’ motivation. Fitness almost always focuses on ‘toward’ motivation – perhaps it’s time to exploit the fear of missing out? The thing that keeps Pokémon Go users interested is the element of surprise and delight when a new Pokémon is won, a bit of competition to keep a Pokegym under their ownership, and the friendship of others using the application – all great learnings for gyms, which need to add creativity and gamification to their oﬀer. This sort of technology is here to stay, and gyms should join in the fun.

CHIEF GAME CHANGER, GAMIFICATION NATION To understand what lessons gyms can take from Pokémon Go, we first have to ask: why does it work? One key is that it hooks you from the word go: it’s almost guaranteed that you’ll catch a Pokémon in the first moments of gameplay, and these opportunities arise frequently in the first few days. This keeps people engaged and wanting to catch more, because it seemed easy. What quick wins can gyms focus on with new members? To progress any further in the game, you need to visit PokeStops – ammunition stops – and you have to physically walk there. People are motivated to travel the distances to see what happens – but exercise is the byproduct of the game, not the end in itself. This is another important learning for fitness providers. Walking distances are also rewarded with medals, and that feelgood buzz of achievement, combined with the endorphins from physical exercise, is a winning formula.