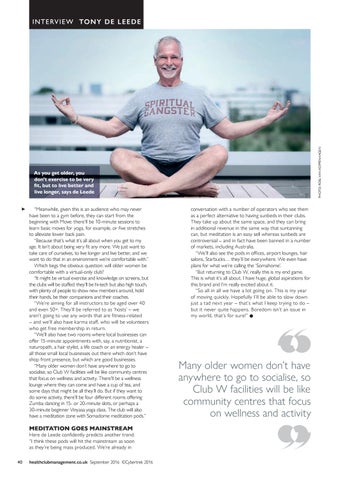 As you get older, you don’t exercise to be very fit, but to live better and live longer, says de Leede “Meanwhile, given this is an audience who may never have been to a gym before, they can start from the beginning with Move: there’ll be 10-minute sessions to learn basic moves for yoga, for example, or five stretches to alleviate lower back pain. “Because that’s what it’s all about when you get to my age. It isn’t about being very fit any more. We just want to take care of ourselves, to live longer and live better, and we want to do that in an environment we’re comfortable with.” Which begs the obvious question: will older women be comfortable with a virtual-only club? “It might be virtual exercise and knowledge on screens, but the clubs will be staﬀed: they’ll be hi-tech but also high touch, with plenty of people to show new members around, hold their hands, be their companions and their coaches. “We’re aiming for all instructors to be aged over 40 and even 50+. They’ll be referred to as ‘hosts’ – we aren’t going to use any words that are fi tness-related – and we’ll also have karma staﬀ, who will be volunteers who get free membership in return. “We’ll also have two rooms where local businesses can oﬀer 15-minute appointments with, say, a nutritionist, a naturopath, a hair stylist, a life coach or an energy healer – all those small local businesses out there which don’t have shop front presence, but which are good businesses. “Many older women don’t have anywhere to go to socialise, so Club W facilities will be like community centres that focus on wellness and activity. There’ll be a wellness lounge where they can come and have a cup of tea, and some days that might be all they’ll do. But if they want to do some activity, there’ll be four diﬀerent rooms oﬀering Zumba dancing in 15- or 20-minute slots, or perhaps a 30-minute beginner Vinyasa yoga class. The club will also have a meditation zone with Somadome meditation pods.”

Here de Leede confidently predicts another trend: “I think these pods will hit the mainstream as soon as they’re being mass produced. We’re already in 40

conversation with a number of operators who see them as a perfect alternative to having sunbeds in their clubs. They take up about the same space, and they can bring in additional revenue in the same way that suntanning can, but meditation is an easy sell whereas sunbeds are controversial – and in fact have been banned in a number of markets, including Australia. “We’ll also see the pods in oﬃces, airport lounges, hair salons, Starbucks… they’ll be everywhere. We even have plans for what we’re calling the ‘Somahome’. “But returning to Club W, really this is my end game. This is what it’s all about. I have huge, global aspirations for this brand and I’m really excited about it. “So all in all we have a lot going on. This is my year of moving quickly. Hopefully I’ll be able to slow down just a tad next year – that’s what I keep trying to do – but it never quite happens. Boredom isn’t an issue in my world, that’s for sure!” ●

Many older women don’t have anywhere to go to socialise, so Club W facilities will be like community centres that focus on wellness and activity