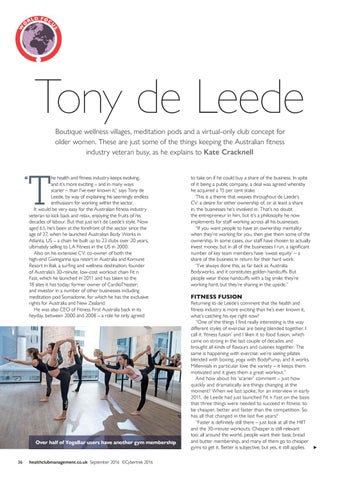 Tony de Leede Boutique wellness villages, meditation pods and a virtual-only club concept for older women. These are just some of the things keeping the Australian fitness industry veteran busy, as he explains to Kate Cracknell

he health and fitness industry keeps evolving, and it’s more exciting – and in many ways scarier – than I’ve ever known it,” says Tony de Leede, by way of explaining his seemingly endless enthusiasm for working within the sector. It would be very easy for the Australian fitness industry veteran to kick back and relax, enjoying the fruits of his decades of labour. But that just isn’t de Leede’s style. Now aged 63, he’s been at the forefront of the sector since the age of 27, when he launched Australian Body Works in Atlanta, US – a chain he built up to 23 clubs over 20 years, ultimately selling to LA Fitness in the US in 2000. Also on his extensive CV: co-owner of both the high-end Gwinganna spa resort in Australia and Komune Resort in Bali, a surfing and wellness destination; founder of Australia’s 30-minute, low-cost workout chain Fit n Fast, which he launched in 2011 and has taken to the 18 sites it has today; former owner of CardioTheater; and investor in a number of other businesses including meditation pod Somadome, for which he has the exclusive rights for Australia and New Zealand. He was also CEO of Fitness First Australia back in its heyday, between 2000 and 2008 – a role he only agreed

Over half of YogaBar users have another gym membership

to take on if he could buy a share of the business. In spite of it being a public company, a deal was agreed whereby he acquired a 15 per cent stake. This is a theme that weaves throughout de Leede’s CV: a desire for either ownership of, or at least a share in, the businesses he’s involved in. That’s no doubt the entrepreneur in him, but it’s a philosophy he now implements for staﬀ working across all his businesses. “If you want people to have an ownership mentality when they’re working for you, then give them some of the ownership. In some cases, our staﬀ have chosen to actually invest money, but in all of the businesses I run, a significant number of key team members have ‘sweat equity’ – a share of the business in return for their hard work. “I’ve always done this, as far back as Australia Bodyworks, and it constitutes golden handcuﬀs. But people wear those handcuﬀs with a big smile: they’re working hard, but they’re sharing in the upside.”

Returning to de Leede’s comment that the health and fitness industry is more exciting than he’s ever known it, what’s catching his eye right now? “One of the things I find really interesting is the way diﬀerent styles of exercise are being blended together. I call it ‘fi tness fusion’ and I liken it to food fusion, which came on strong in the last couple of decades and brought all kinds of flavours and cuisines together. The same is happening with exercise: we’re seeing pilates blended with boxing, yoga with BodyPump, and it works. Millennials in particular love the variety – it keeps them motivated and it gives them a great workout.” And how about his ‘scarier’ comment – just how quickly and dramatically are things changing at the moment? When we last spoke, for an interview in early 2011, de Leede had just launched Fit n Fast on the basis that three things were needed to succeed in fi tness: to be cheaper, better and faster than the competition. So has all that changed in the last fi ve years? “Faster is definitely still there – just look at all the HIIT and the 30-minute workouts. Cheaper is still relevant too: all around the world, people want their basic bread and butter membership, and many of them go to cheaper gyms to get it. Better is subjective, but yes, it still applies.