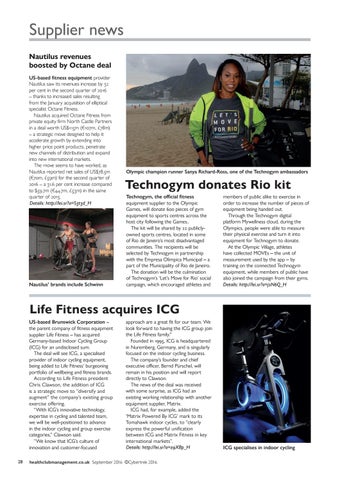 Supplier news Nautilus revenues boosted by Octane deal US-based fitness equipment provider Nautilus saw its revenues increase by 32 per cent in the second quarter of 2016 – thanks to increased sales resulting from the January acquisition of elliptical specialist Octane Fitness. Nautilus acquired Octane Fitness from private equity firm North Castle Partners in a deal worth US$115m (€107m, £78m) – a strategic move designed to help it accelerate growth by extending into higher price point products, penetrate new channels of distribution and expand into new international markets. The move seems to have worked, as Nautilus reported net sales of US$78.5m (€70m, £59m) for the second quarter of 2016 – a 31.6 per cent increase compared to $59.7m (€44.7m, £53m) in the same quarter of 2015. Details: http://lei.sr?a=S3t3d_H

Olympic champion runner Sanya Richard-Ross, one of the Technogym ambassadors

Technogym donates Rio kit Technogym, the official fitness equipment supplier to the Olympic Games, will donate 600 pieces of gym equipment to sports centres across the host city following the Games.. The kit will be shared by 22 publiclyowned sports centres, located in some of Rio de Janeiro’s most disadvantaged communities. The recipients will be selected by Technogym in partnership with the Empresa Olimpica Municipal – a part of the Municipality of Rio de Janeiro. The donation will be the culmination of Technogym’s ‘Let’s Move for Rio’ social campaign, which encouraged athletes and

members of public alike to exercise in order to increase the number of pieces of equipment being handed out. Through the Technogym digital platform Mywellness cloud, during the Olympics, people were able to measure their physical exercise and turn it into equipment for Technogym to donate. At the Olympic Village, athletes have collected MOVEs – the unit of measurement used by the app – by training on the connected Technogym equipment, while members of public have also joined the campaign from their gyms. Details: http://lei.sr?a=j2N6Q_H

Life Fitness acquires ICG US-based Brunswick Corporation – the parent company of fitness equipment supplier Life Fitness – has acquired Germany-based Indoor Cycling Group (ICG) for an undisclosed sum. The deal will see ICG, a specialised provider of indoor cycling equipment, being added to Life Fitness’ burgeoning portfolio of wellbeing and fitness brands. According to Life Fitness president Chris Clawson, the addition of ICG is a strategic move to “diversify and augment” the company’s existing group exercise offering. “With ICG’s innovative technology, expertise in cycling and talented team, we will be well-positioned to advance in the indoor cycling and group exercise categories,” Clawson said. “We know that ICG’s culture of innovation and customer-focused 28

approach are a great fit for our team. We look forward to having the ICG group join the Life Fitness family.” Founded in 1995, ICG is headquartered in Nuremberg, Germany, and is singularly focused on the indoor cycling business. The company’s founder and chief executive officer, Bernd Pürschel, will remain in his position and will report directly to Clawson. The news of the deal was received with some surprise, as ICG had an existing working relationship with another equipment supplier, Matrix. ICG had, for example, added the ‘Matrix Powered By ICG’ mark to its Tomahawk indoor cycles, to “clearly express the powerful unification between ICG and Matrix Fitness in key international markets”. Details: http://lei.sr?a=z9X8p_H