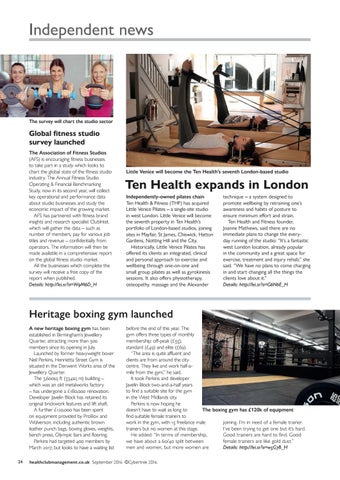 The survey will chart the studio sector

Global fitness studio survey launched The Association of Fitness Studios (AFS) is encouraging fitness businesses to take part in a study which looks to chart the global state of the fitness studio industry. The Annual Fitness Studio Operating & Financial Benchmarking Study, now in its second year, will collect key operational and performance data about studio businesses and study the economic impact of the growing market. AFS has partnered with fitness brand insights and research specialist ClubIntel, which will gather the data – such as number of members, pay for various job titles and revenue – confidentially from operators. The information will then be made available in a comprehensive report on the global fitness studio market. All the businesses which complete the survey will receive a free copy of the report when published. Details: http://lei.sr?a=W9M6D_H

technique – a system designed to promote wellbeing by retraining one’s awareness and habits of posture to ensure minimum effort and strain. Ten Health and Fitness founder, Joanne Mathews, said there are no immediate plans to change the everyday running of the studio: “It’s a fantastic west London location, already popular in the community and a great space for exercise, treatment and injury rehab,” she said. “We have no plans to come charging in and start changing all the things the clients love about it.” Details: http://lei.sr?a=G6N6E_H

Heritage boxing gym launched A new heritage boxing gym has been established in Birmingham’s Jewellery Quarter, attracting more than 300 members since its opening in July. Launched by former heavyweight boxer Neil Perkins, Henrietta Street Gym is situated in the Derwent Works area of the Jewellery Quarter. The 3,600sq ft (334sq m) building – which was an old metalworks factory – has undergone a £180,000 renovation. Developer Javelin Block has retained its original brickwork features and lift shaft. A further £120,000 has been spent on equipment provided by ProBox and Wolverson, including authentic brown leather punch bags, boxing gloves, weights, bench press, Olympic bars and flooring. Perkins had targeted 400 members by March 2017, but looks to have a waiting list 24

before the end of this year. The gym offers three types of monthly membership: off-peak (£35), standard (£49) and elite (£69). “The area is quite affluent and clients are from around the city centre. They live and work half-amile from the gym,” he said. It took Perkins and developer Javelin Block two-and-a-half years to find a suitable site for the gym in the West Midlands city. Perkins is now hoping he doesn’t have to wait as long to The boxing gym has £120k of equipment find suitable female trainers to joining. I’m in need of a female trainer. work in the gym, with 15 freelance male I’ve been trying to get one but it’s hard. trainers but no women at this stage. Good trainers are hard to find. Good He added: “In terms of membership, female trainers are like gold dust.” we have about a 60/40 split between Details: http://lei.sr?a=w5G7B_H men and women, but more women are