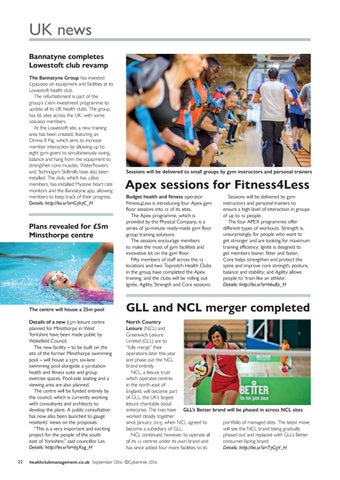 UK news Bannatyne completes Lowestoft club revamp The Bannatyne Group has invested £500,000 on equipment and facilities at its Lowestoft health club. The refurbishment is part of the group’s £16m investment programme to update all its UK health clubs. The group has 66 sites across the UK, with some 200,000 members. At the Lowestoft site, a new training area has been created, featuring an Omnia 8 Rig, which aims to increase member interaction by allowing up to eight gym-goers to simultaneously swing, balance and hang from the equipment to strengthen core muscles. WaterRowers and Technogym Skillmills have also been installed. The club, which has 2,800 members, has installed Myzone heart rate monitors and the Bannatyne app, allowing members to keep track of their progress. Details: http://lei.sr?a=G7h7C_H

Apex sessions for Fitness4Less Budget health and fitness operator Fitness4Less is introducing four Apex gym floor sessions into 12 of its sites. The Apex programme, which is provided by the Physical Company, is a series of 30-minute ready-made gym floor group training solutions. The sessions encourage members to make the most of gym facilities and innovative kit on the gym floor. Fifty members of staff across the 12 locations and two Topnotch Health Clubs in the group have completed the Apex training, and the clubs will be rolling out Ignite, Agility, Strength and Core sessions.

Sessions will be delivered by gym instructors and personal trainers to ensure a high level of interaction in groups of up to 12 people. The four APEX programmes offer different types of workouts. Strength is, unsurprisingly, for people who want to get stronger and are looking for maximum training efficiency; Ignite is designed to get members leaner, fitter and faster; Core helps strengthen and protect the spine and improve core strength, posture, balance and stability; and Agility allows people to ‘train like an athlete’. Details: http://lei.sr?a=h6u8z_H

The centre will house a 25m pool

Details of a new £5m leisure centre planned for Minsthorpe in West Yorkshire have been made public by Wakefield Council. The new facility – to be built on the site of the former Minsthorpe swimming pool – will house a 25m, six-lane swimming pool alongside a 50-station health and fitness suite and group exercise spaces. Pool-side seating and a viewing area are also planned. The centre will be funded entirely by the council, which is currently working with consultants and architects to develop the plans. A public consultation has now also been launched to gauge residents’ views on the proposals. “This is a very important and exciting project for the people of the south east of Yorkshire,” said councillor Les Details: http://lei.sr?a=d3X2g_H

North Country Leisure (NCL) and Greenwich Leisure Limited (GLL) are to “fully merge” their operations later this year and phase out the NCL brand entirely. NCL, a leisure trust which operates centres in the north-east of England, will become part of GLL, the UK’s largest leisure charitable social enterprise. The two have GLL’s Better brand will be phased in across NCL sites worked closely together portfolio of managed sites. The latest move since January 2015, when NCL agreed to will see the NCL brand being gradually become a subsidiary of GLL. phased out and replaced with GLL’s Better NCL continued, however, to operate all consumer-facing brand. of its 12 centres under its own brand and has since added four more facilities to its Details: http://lei.sr?a=T7G3V_H