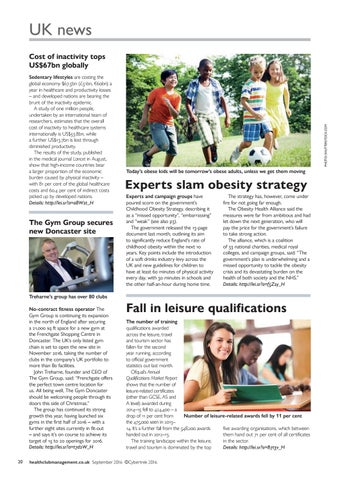 UK news Sedentary lifestyles are costing the global economy $67.5bn (£51bn, €60bn) a year in healthcare and productivity losses – and developed nations are bearing the brunt of the inactivity epidemic. A study of one million people, undertaken by an international team of researchers, estimates that the overall cost of inactivity to healthcare systems internationally is US$53.8bn, while a further US$13.7bn is lost through diminished productivity. The results of the study, published in the medical journal Lancet in August, show that high-income countries bear a larger proportion of the economic burden caused by physical inactivity – with 81 per cent of the global healthcare costs and 60.4 per cent of indirect costs picked up by developed nations. Details: http://lei.sr?a=a8W2t_H

Today’s obese kids will be tomorrow’s obese adults, unless we get them moving

Experts slam obesity strategy Experts and campaign groups have poured scorn on the government’s Childhood Obesity Strategy, describing it as a “missed opportunity”, “embarrassing” and “weak” (see also p3). The government released the 13-page document last month, outlining its aim to significantly reduce England’s rate of childhood obesity within the next 10 years. Key points include the introduction of a soft drinks industry levy across the UK and new guidelines for children to have at least 60 minutes of physical activity every day, with 30 minutes in schools and the other half-an-hour during home time.

The strategy has, however, come under fire for not going far enough. The Obesity Health Alliance said the measures were far from ambitious and had let down the next generation, who will pay the price for the government’s failure to take strong action. The alliance, which is a coalition of 33 national charities, medical royal colleges, and campaign groups, said: “The government’s plan is underwhelming and a missed opportunity to tackle the obesity crisis and its devastating burden on the health of both society and the NHS.” Details: http://lei.sr?a=f5Z2y_H

Treharne’s group has over 80 clubs No-contract fitness operator The Gym Group is continuing its expansion in the north of England after securing a 21,000 sq ft space for a new gym at the Frenchgate Shopping Centre in Doncaster. The UK’s only listed gym chain is set to open the new site in November 2016, taking the number of clubs in the company’s UK portfolio to more than 80 facilities. John Treharne, founder and CEO of The Gym Group, said: “Frenchgate offers the perfect town centre location for us. All being well, The Gym Doncaster should be welcoming people through its doors this side of Christmas.” The group has continued its strong growth this year, having launched six gyms in the first half of 2016 – with a further eight sites currently in fit-out – and says it’s on course to achieve its target of 15 to 20 openings for 2016. Details: http://lei.sr?a=t7d2W_H 20

Fall in leisure qualifications The number of training qualifications awarded across the leisure, travel and tourism sector has fallen for the second year running, according to official government statistics out last month. Ofqual’s Annual Qualifications Market Report shows that the number of leisure-related certificates (other than GCSE, AS and A level) awarded during 2014–15 fell to 424,400 – a drop of 11 per cent from Number of leisure-related awards fell by 11 per cent the 475,000 seen in 2013– five awarding organisations, which between 14. It’s a further fall from the 548,200 awards them hand out 71 per cent of all certificates handed out in 2012–13. in the sector. The training landscape within the leisure, travel and tourism is dominated by the top Details: http://lei.sr?a=B7t3v_H