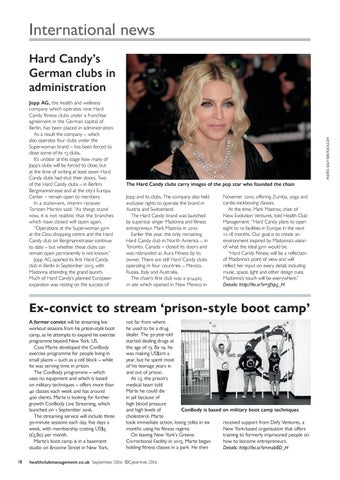 Jopp AG, the health and wellness company which operates nine Hard Candy fitness clubs under a franchise agreement in the German capital of Berlin, has been placed in administration. As a result the company – which also operates four clubs under the Superwoman brand – has been forced to close some of its 13 clubs. It’s unclear at this stage how many of Jopp’s clubs will be forced to close, but at the time of writing at least seven Hard Candy clubs had shut their doors. Two of the Hard Candy clubs – in Berlin’s Bergmannstrasse and at the city’s Europa Center – remain open to members. In a statement, interim receiver Torsten Martini said: “As things stand now, it is not realistic that the branches which have closed will open again. “Operations at the Superwoman gym at the Ciou shopping centre and the Hard Candy club on Bergmannstrasse continue to date – but whether these clubs can remain open permanently is not known.” Jopp AG opened its first Hard Candy club in Berlin in September 2013, with Madonna attending the grand launch. Much of Hard Candy’s planned European expansion was resting on the success of

The Hard Candy clubs carry images of the pop star who founded the chain Jopp and its clubs. The company also held exclusive rights to operate the brand in Austria and Switzerland. The Hard Candy brand was launched by superstar singer Madonna and fitness entrepreneur Mark Mastrov in 2010. Earlier this year, the only remaining Hard Candy club in North America – in Toronto, Canada – closed its doors and was rebranded as Aura Fitness by its owner. There are still Hard Candy clubs operating in four countries – Mexico, Russia, Italy and Australia. The chain’s first club was a 9,144sq m site which opened in New Mexico in

Novemer 2010, offering Zumba, yoga and cardio-kickboxing classes. At the time, Mark Mastrov, chair of New Evolution Ventures, told Health Club Management: “Hard Candy plans to open eight to 10 facilities in Europe in the next 12-18 months. Our goal is to create an environment inspired by Madonna’s vision of what the ideal gym would be. “Hard Candy Fitness will be a reflection of Madonna’s point of view and will reflect her input on every detail, including music, space, light and other design cues. Madonna’s touch will be everywhere.” Details: http://lei.sr?a=3f2p5_H

Ex-convict to stream ‘prison-style boot camp’ A former convict will be streaming live workout sessions from his prison-style boot camp, as he attempts to expand his exercise programme beyond New York, US. Coss Marte developed the ConBody exercise programme for people living in small places – such as a cell block – while he was serving time in prison. The ConBody programme – which uses no equipment and which is based on military techniques – offers more than 40 classes each week and has around 400 clients. Marte is looking for further growth ConBody Live Streaming, which launched on 1 September 2016. The streaming service will include three 30-minute sessions each day, five days a week, with membership costing US$5 (£3.80) per month. Marte’s boot camp is in a basement studio on Broome Street in New York, 18

not far from where he used to be a drug dealer. The 30-year-old started dealing drugs at the age of 13. By 19, he was making US$2m a year, but he spent most of his teenage years in and out of prison. At 23, the prison’s medical team told Marte he could die in jail because of high blood pressure and high levels of ConBody is based on military boot camp techniques cholesterol. Marte received support from Defy Ventures, a took immediate action, losing 70lbs in six New York-based organisation that offers months using his fitness regime. training to formerly imprisoned people on On leaving New York’s Greene how to become entrepreneurs. Correctional Facility in 2013, Marte began holding fitness classes in a park. He then Details: http://lei.sr?a=m2b8D_H