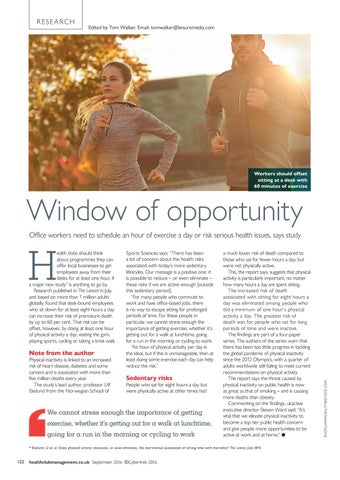 ealth clubs should think about programmes they can offer local businesses to get employees away from their desks for at least one hour, if a major new study* is anything to go by. Research published in The Lancet in July, and based on more than 1 million adults globally, found that desk-bound employees who sit down for at least eight hours a day can increase their risk of premature death by up to 60 per cent. That risk can be offset, however, by doing at least one hour of physical activity a day: visiting the gym, playing sports, cycling or taking a brisk walk.

Note from the author

Physical inactivity is linked to an increased risk of heart disease, diabetes and some cancers and is associated with more than five million deaths every year. The study’s lead author, professor Ulf Ekelund from the Norwegian School of

Sports Sciences says: “There has been a lot of concern about the health risks associated with today’s more sedentary lifestyles. Our message is a positive one: it is possible to reduce – or even eliminate – these risks if we are active enough [outside this sedentary period]. “For many people who commute to work and have office-based jobs, there is no way to escape sitting for prolonged periods of time. For these people in particular, we cannot stress enough the importance of getting exercise, whether it’s getting out for a walk at lunchtime, going for a run in the morning or cycling to work. “An hour of physical activity per day is the ideal, but if this is unmanageable, then at least doing some exercise each day can help reduce the risk.”

We cannot stress enough the importance of getting exercise, whether it’s getting out for a walk at lunchtime, going for a run in the morning or cycling to work

a much lower risk of death compared to those who sat for fewer hours a day, but were not physically active. This, the report says, suggests that physical activity is particularly important, no matter how many hours a day are spent sitting. The increased risk of death associated with sitting for eight hours a day was eliminated among people who did a minimum of one hour’s physical activity a day. The greatest risk of death was for people who sat for long periods of time and were inactive. The findings are part of a four-paper series. The authors of the series warn that there has been too little progress in tackling the global pandemic of physical inactivity since the 2012 Olympics, with a quarter of adults worldwide still failing to meet current recommendations on physical activity. The report says the threat caused by physical inactivity on public health is now as great as that of smoking – and is causing more deaths than obesity. Commenting on the findings, ukactive executive director Steven Ward said: “It’s vital that we elevate physical inactivity to become a top tier public health concern and give people more opportunities to be active at work and at home.” ●

* Ekelund, U et al. Does physical activity attenuate, or even eliminate, the detrimental association of sitting time with mortality? The Lancet, July 2016