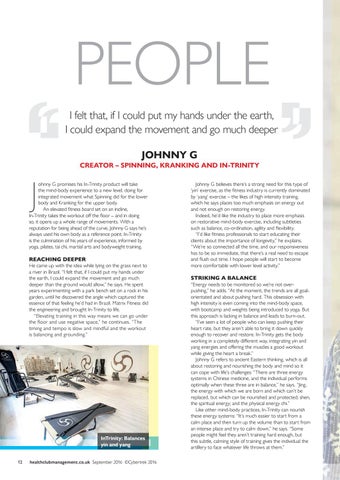 PEOPLE I felt that, if I could put my hands under the earth, I could expand the movement and go much deeper JOHNNY G

ohnny G promises his In-Trinity product will take the mind-body experience to a new level, doing for integrated movement what Spinning did for the lower body and Kranking for the upper body. An elevated fitness board set on an incline, In-Trinity takes the workout oﬀ the floor – and in doing so, it opens up a whole range of movements. With a reputation for being ahead of the curve, Johnny G says he’s always used his own body as a reference point. In-Trinity is the culmination of his years of experience, informed by yoga, pilates, tai chi, martial arts and bodyweight training.

He came up with the idea while lying on the grass next to a river in Brazil. “I felt that, if I could put my hands under the earth, I could expand the movement and go much deeper than the ground would allow,” he says. He spent years experimenting with a park bench set on a rock in his garden, until he discovered the angle which captured the essence of that feeling he’d had in Brazil. Matrix Fitness did the engineering and brought In-Trinity to life. “Elevating training in this way means we can go under the fl oor and use negative space,” he continues. “The timing and tempo is slow and mindful and the workout is balancing and grounding.”

Johnny G believes there’s a strong need for this type of ‘yin’ exercise, as the fitness industry is currently dominated by ‘yang’ exercise – the likes of high intensity training, which he says places too much emphasis on energy out and not enough on restoring energy. Indeed, he’d like the industry to place more emphasis on restorative mind-body exercise, including subtleties such as balance, co-ordination, agility and flexibility. “I’d like fitness professionals to start educating their clients about the importance of longevity,” he explains. “We’re so connected all the time, and our responsiveness has to be so immediate, that there’s a real need to escape and flush out time. I hope people will start to become more comfortable with lower level activity.”

“Energy needs to be monitored so we’re not overpushing,” he adds. “At the moment, the trends are all goalorientated and about pushing hard. This obsession with high intensity is even coming into the mind-body space, with bootcamp and weights being introduced to yoga. But this approach is lacking in balance and leads to burn-out. “I’ve seen a lot of people who can keep pushing their heart rate, but they aren’t able to bring it down quickly enough to recover and restore. In-Trinity gets the body working in a completely diﬀerent way, integrating yin and yang energies and oﬀering the muscles a good workout while giving the heart a break.” Johnny G refers to ancient Eastern thinking, which is all about restoring and nourishing the body and mind so it can cope with life’s challenges: “There are three energy systems in Chinese medicine, and the individual performs optimally when these three are in balance,” he says. “Jing, the energy with which we are born and which can’t be replaced, but which can be nourished and protected; shen, the spiritual energy; and the physical energy chi.” Like other mind-body practices, In-Trinity can nourish these energy systems: “It’s much easier to start from a calm place and then turn up the volume than to start from an intense place and try to calm down,” he says. “Some people might feel they aren’t training hard enough, but this subtle, calming style of training gives the individual the artillery to face whatever life throws at them.”