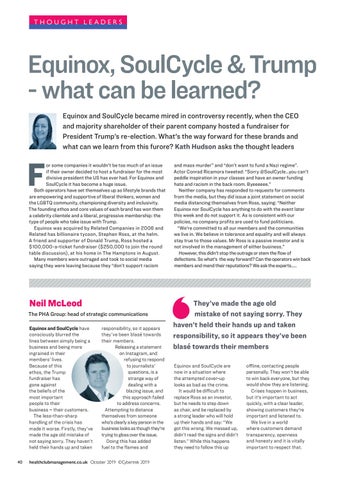 Equinox, SoulCycle &amp; Trump - what can be learned?

Equinox and SoulCycle became mired in controversy recently, when the CEO and majority shareholder of their parent company hosted a fundraiser for President Trump’s re-election. What&#39;s the way forward for these brands and what can we learn from this furore? Kath Hudson asks the thought leaders

or some companies it wouldn&#39;t be too much of an issue if their owner decided to host a fundraiser for the most divisive president the US has ever had. For Equinox and SoulCycle it has become a huge issue. Both operators have set themselves up as lifestyle brands that are empowering and supportive of liberal thinkers, women and the LGBTQ community, championing diversity and inclusivity. The founding ethos and core values of each brand has won them a celebrity clientele and a liberal, progressive membership: the type of people who take issue with Trump. Equinox was acquired by Related Companies in 2006 and Related has billionaire tycoon, Stephen Ross, at the helm. A friend and supporter of Donald Trump, Ross hosted a $100,000-a-ticket fundraiser ($250,000 to join the round table discussion), at his home in The Hamptons in August. Many members were outraged and took to social media saying they were leaving because they “don’t support racism

and mass murder” and “don’t want to fund a Nazi regime”. Actor Conrad Ricamora tweeted: “Sorry @SoulCycle…you can’t peddle inspiration in your classes and have an owner funding hate and racism in the back room. Byeeeeee.” Neither company has responded to requests for comments from the media, but they did issue a joint statement on social media distancing themselves from Ross, saying: “Neither Equinox nor SoulCycle has anything to do with the event later this week and do not support it. As is consistent with our policies, no company profits are used to fund politicians. “We&#39;re committed to all our members and the communities we live in. We believe in tolerance and equality and will always stay true to those values. Mr Ross is a passive investor and is not involved in the management of either business.” However, this didn&#39;t stop the outrage or stem the flow of defections. So what&#39;s the way forward? Can the operators win back members and mend their reputations? We ask the experts…..

They’ve made the age old mistake of not saying sorry. They haven’t held their hands up and taken responsibility, so it appears they’ve been blasé towards their members

The PHA Group: head of strategic communications Equinox and SoulCycle have consciously blurred the lines between simply being a business and being more ingrained in their members’ lives. Because of this ethos, the Trump fundraiser has gone against the beliefs of the most important people to their business – their customers. The less-than-sharp handling of the crisis has made it worse. Firstly, they’ve made the age old mistake of not saying sorry. They haven’t held their hands up and taken 40

responsibility, so it appears they’ve been blasé towards their members. Releasing a statement on Instagram, and refusing to respond to journalists’ questions, is a strange way of dealing with a blazing issue, and this approach failed to address concerns. Attempting to distance themselves from someone who&#39;s clearly a key person in the business looks as though they&#39;re trying to gloss over the issue. Doing this has added fuel to the flames and

Equinox and SoulCycle are now in a situation where the attempted cover-up looks as bad as the crime. It would be difficult to replace Ross as an investor, but he needs to step down as chair, and be replaced by a strong leader who will hold up their hands and say: “We got this wrong. We messed up, didn’t read the signs and didn’t listen.” While this happens they need to follow this up

offline, contacting people personally. They won’t be able to win back everyone, but they would show they are listening. Crises happen in business, but it&#39;s important to act quickly, with a clear leader, showing customers they&#39;re important and listened to. We live in a world where customers demand transparency, openness and honesty and it is vitally important to respect that.