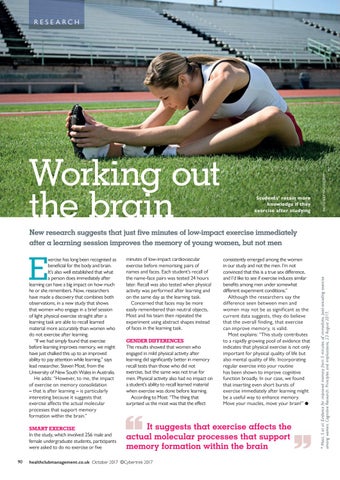 Working out the brain

Students’ retain more knowledge if they exercise after studying

xercise has long been recognised as beneficial for the body and brain. It’s also well established that what a person does immediately after learning can have a big impact on how much he or she remembers. Now, researchers have made a discovery that combines both observations, in a new study that shows that women who engage in a brief session of light physical exercise straight after a learning task are able to recall learned material more accurately than women who do not exercise after learning. “If we had simply found that exercise before learning improves memory, we might have just chalked this up to an improved ability to pay attention while learning,” says lead researcher, Steven Most, from the University of New South Wales in Australia. He adds: “However, to me, the impact of exercise on memory consolidation – that is after learning – is particularly interesting because it suggests that exercise affects the actual molecular processes that support memory formation within the brain.” SMART EXERCISE In the study, which involved 256 male and female undergraduate students, participants were asked to do no exercise or five

minutes of low-impact cardiovascular exercise before memorising pairs of names and faces. Each student’s recall of the name-face pairs was tested 24 hours later. Recall was also tested when physical activity was performed after learning and on the same day as the learning task. Concerned that faces may be more easily remembered than neutral objects, Most and his team then repeated the experiment using abstract shapes instead of faces in the learning task. GENDER DIFFERENCES The results showed that women who engaged in mild physical activity after learning did significantly better in memory recall tests than those who did not exercise, but the same was not true for men. Physical activity also had no impact on a student’s ability to recall learned material when exercise was done before learning. According to Most: “The thing that surprised us the most was that the effect

consistently emerged among the women in our study and not the men. I’m not convinced that this is a true sex difference, and I’d like to see if exercise induces similar benefits among men under somewhat different experiment conditions.” Although the researchers say the difference seen between men and women may not be as significant as the current data suggests, they do believe that the overall finding, that exercise can improve memory, is valid. Most explains: “This study contributes to a rapidly growing pool of evidence that indicates that physical exercise is not only important for physical quality of life but also mental quality of life. Incorporating regular exercise into your routine has been shown to improve cognitive function broadly. In our case, we found that inserting even short bursts of exercise immediately after learning might be a useful way to enhance memory. Move your muscles, move your brain!” ●

New research suggests that just five minutes of low-impact exercise immediately after a learning session improves the memory of young women, but not men