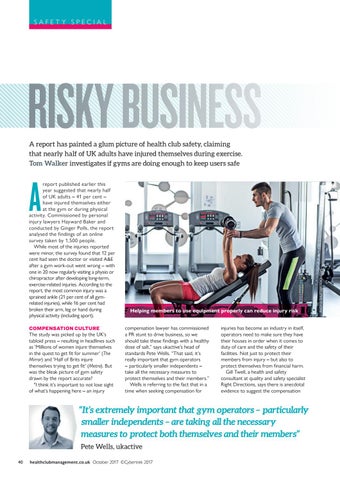 RISKY BUSINESS A report has painted a glum picture of health club safety, claiming that nearly half of UK adults have injured themselves during exercise. Tom Walker investigates if gyms are doing enough to keep users safe

COMPENSATION CULTURE The study was picked up by the UK’s tabloid press – resulting in headlines such as 'Millions of women injure themselves in the quest to get fit for summer' (The Mirror) and 'Half of Brits injure themselves trying to get fit' (Metro). But was the bleak picture of gym safety drawn by the report accurate? "I think it’s important to not lose sight of what’s happening here – an injury

Helping members to use equipment properly can reduce injury risk compensation lawyer has commissioned a PR stunt to drive business, so we should take these findings with a healthy dose of salt,” says ukactive’s head of standards Pete Wells. “That said, it’s really important that gym operators – particularly smaller independents – take all the necessary measures to protect themselves and their members.” Wells is referring to the fact that in a time when seeking compensation for

injuries has become an industry in itself, operators need to make sure they have their houses in order when it comes to duty of care and the safety of their facilities. Not just to protect their members from injury – but also to protect themselves from financial harm. Gill Twell, a health and safety consultant at quality and safety specialist Right Directions, says there is anecdotal evidence to suggest the compensation

“It’s extremely important that gym operators – particularly smaller independents – are taking all the necessary measures to protect both themselves and their members” Pete Wells, ukactive 40

report published earlier this year suggested that nearly half of UK adults – 41 per cent – have injured themselves either at the gym or during physical activity. Commissioned by personal injury lawyers Hayward Baker and conducted by Ginger Polls, the report analysed the findings of an online survey taken by 1,500 people. While most of the injuries reported were minor, the survey found that 12 per cent had seen the doctor or visited A&E after a gym work-out went wrong – with one in 20 now regularly visiting a physio or chiropractor after developing long-term, exercise-related injuries. According to the report, the most common injury was a sprained ankle (21 per cent of all gymrelated injuries), while 16 per cent had broken their arm, leg or hand during physical activity (including sport).