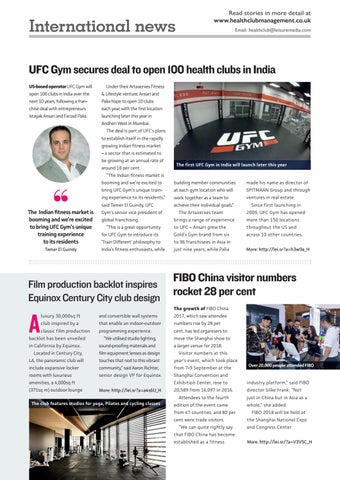 Under their Artaxerxes Fitness

open 100 clubs in India over the

next 10 years, following a fran-

each year, with the first location

launching later this year in Andheri West in Mumbai. The deal is part of UFC’s plans to establish itself in the rapidly growing Indian fitness market – a sector that is estimated to be growing at an annual rate of around 18 per cent.

The first UFC Gym in India will launch later this year

“The Indian fitness market is booming and we’re excited to

made his name as director of

at each gym location who will

ing experience to its residents,”

work together as a team to

brings a range of experience

to UFC – Ansari grew the

throughout the US and

for UFC Gym to introduce its

to 96 franchisees in Asia in

“This is a great opportunity

Since first launching in

club inspired by a

that enable an indoor-outdoor

numbers rise by 28 per

cent, has led organisers to

backlot has been unveiled in California by Equinox.

move the Shanghai show to a larger venue for 2018.

LA, the panoramic club will

touches that nod to this vibrant

from 7-9 September at the

Visitor numbers at this

Attendees to the fourth The club features studios for yoga, Pilates and cycling classes

edition of the event came from 47 countries, and 80 per cent were trade visitors. “We can quite rightly say

just in China but in Asia as a whole,” she added. FIBO 2018 will be held at the Shanghai National Expo and Congress Center.

that FIBO China has become established as a fitness