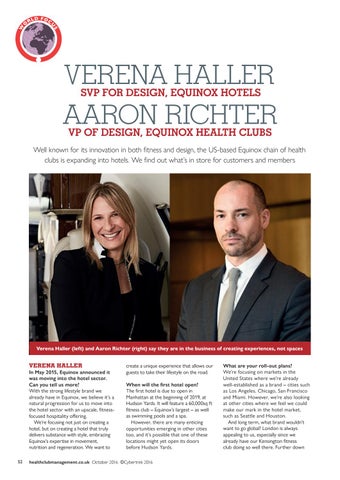 Well known for its innovation in both fitness and design, the US-based Equinox chain of health clubs is expanding into hotels. We find out what’s in store for customers and members

Verena Haller (left) and Aaron Richter (right) say they are in the business of creating experiences, not spaces

In May 2015, Equinox announced it was moving into the hotel sector. Can you tell us more? With the strong lifestyle brand we already have in Equinox, we believe it’s a natural progression for us to move into the hotel sector with an upscale, fitnessfocused hospitality oﬀering. We’re focusing not just on creating a hotel, but on creating a hotel that truly delivers substance with style, embracing Equinox’s expertise in movement, nutrition and regeneration. We want to 52

create a unique experience that allows our guests to take their lifestyle on the road. When will the first hotel open? The first hotel is due to open in Manhattan at the beginning of 2019, at Hudson Yards. It will feature a 60,000sq ft fitness club – Equinox’s largest – as well as swimming pools and a spa. However, there are many enticing opportunities emerging in other cities too, and it’s possible that one of these locations might yet open its doors before Hudson Yards.

What are your roll-out plans? We’re focusing on markets in the United States where we’re already well-established as a brand – cities such as Los Angeles, Chicago, San Francisco and Miami. However, we’re also looking at other cities where we feel we could make our mark in the hotel market, such as Seattle and Houston. And long term, what brand wouldn’t want to go global? London is always appealing to us, especially since we already have our Kensington fitness club doing so well there. Further down