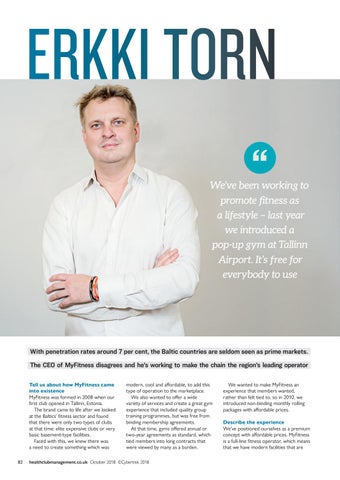 We’ve been working to promote fitness as a lifestyle – last year we introduced a pop-up gym at Tallinn Airport. It’s free for everybody to use

With penetration rates around 7 per cent, the Baltic countries are seldom seen as prime markets. The CEO of MyFitness disagrees and he’s working to make the chain the region’s leading operator Tell us about how MyFitness came into existence MyFitness was formed in 2008 when our first club opened in Tallinn, Estonia. The brand came to life after we looked at the Baltics’ fitness sector and found that there were only two types of clubs at that time: elite expensive clubs or very basic basement-type facilities. Faced with this, we knew there was a need to create something which was 82

modern, cool and aﬀordable, to add this type of operation to the marketplace. We also wanted to oﬀer a wide variety of services and create a great gym experience that included quality group training programmes, but was free from binding membership agreements. At that time, gyms oﬀered annual or two-year agreements as standard, which tied members into long contracts that were viewed by many as a burden.