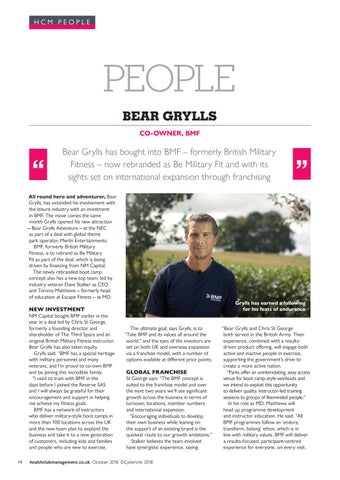 All round hero and adventurer, Bear Grylls, has extended his involvement with the leisure industry with an investment in BMF. The move comes the same month Grylls opened his new attraction – Bear Grylls Adventure – at the NEC as part of a deal with global theme park operator, Merlin Entertainments. BMF, formerly British Military Fitness, is to rebrand as Be Military Fit as part of the deal, which is being driven by financing from NM Capital. The newly rebranded boot camp concept also has a new top team, led by industry veteran Dave Stalker as CEO and Tommy Matthews – formerly head of education at Escape Fitness – as MD.

Grylls has earned a following for his feats of endurance

NM Capital bought BMF earlier in the year in a deal led by Chris St George, formerly a founding director and shareholder of The Third Space and an original British Military Fitness instructor. Bear Grylls has also taken equity. Grylls said, “BMF has a special heritage with military personnel and many veterans, and I’m proud to co-own BMF and be joining this incredible family. “I used to train with BMF in the days before I joined the Reserve SAS and I will always be grateful for their encouragement and support in helping me achieve my fitness goals. BMF has a network of instructors who deliver military-style boot camps in more than 100 locations across the UK and the new team plan to expland the business and take it to a new generation of customers, including kids and families and people who are new to exercise. 14

The ultimate goal, says Grylls, is to “Take BMF and its values all around the world,” and the eyes of the investors are set on both UK and overseas expansion via a franchise model, with a number of options available at diﬀerent price points.

St George says: “The BMF concept is suited to the franchise model and over the next two years we’ll see significant growth across the business in terms of turnover, locations, member numbers and international expansion. “Encouraging individuals to develop their own business while leaning on the support of an existing brand is the quickest route to our growth ambitions.” Stalker believes the team involved have synergistic experience, saying:

“Bear Grylls and Chris St George both served in the British Army. Their experience, combined with a resultsdriven product oﬀering, will engage both active and inactive people in exercise, supporting the government’s drive to create a more active nation. “Parks oﬀer an unintimidating, easy access venue for boot camp-style workouts and we intend to exploit this opportunity to deliver quality, instructor-led training sessions to groups of likeminded people.” In his role as MD, Matthews will head up programme development and instructor education. He said: “All BMF programmes follow an ‘endure, transform, belong’ ethos, which is in line with military values. BMF will deliver a results-focused, participant-centred experience for everyone, on every visit.