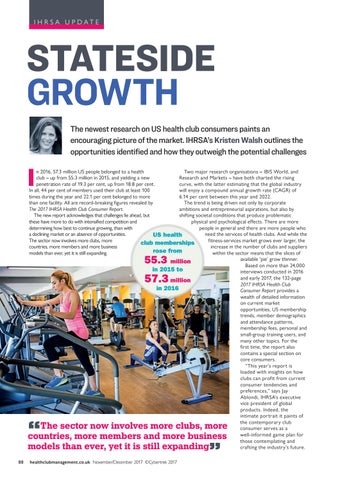 StaTESiDE GRoWtH The newest research on US health club consumers paints an encouraging picture of the market. IHRSA’s Kristen Walsh outlines the opportunities identified and how they outweigh the potential challenges

n 2016, 57.3 million US people belonged to a health Two major research organisations – IBIS World, and club – up from 55.3 million in 2015, and yielding a new Research and Markets – have both charted the rising penetration rate of 19.3 per cent, up from 18.8 per cent. curve, with the latter estimating that the global industry In all, 44 per cent of members used their club at least 100 will enjoy a compound annual growth rate (CAGR) of times during the year and 22.1 per cent belonged to more 6.14 per cent between this year and 2022. than one facility. All are record-breaking figures revealed by The trend is being driven not only by corporate The 2017 IHRSA Health Club Consumer Report. ambitions and entrepreneurial aspirations, but also by The new report acknowledges that challenges lie ahead, but shifting societal conditions that produce problematic these have more to do with intensified competition and physical and psychological effects. There are more determining how best to continue growing, than with people in general and there are more people who a declining market or an absence of opportunities. need the services of health clubs. And while the US health The sector now involves more clubs, more fitness-services market grows ever larger, the club memberships countries, more members and more business increase in the number of clubs and suppliers rose from models than ever, yet it is still expanding. within the sector means that the slices of available ‘pie’ grow thinner. million Based on more than 24,000 in 2015 to interviews conducted in 2016 and early 2017, the 132-page million 2017 IHRSA Health Club in 2016 Consumer Report provides a wealth of detailed information on current market opportunities, US membership trends, member demographics and attendance patterns, membership fees, personal and small-group training users, and many other topics. For the first time, the report also contains a special section on core consumers. “This year’s report is loaded with insights on how clubs can profit from current consumer tendencies and preferences,” says Jay Ablondi, IHRSA’s executive vice president of global products. Indeed, the intimate portrait it paints of the contemporary club consumer serves as a well-informed game plan for those contemplating and crafting the industry’s future.

models than ever, yet it is still expanding