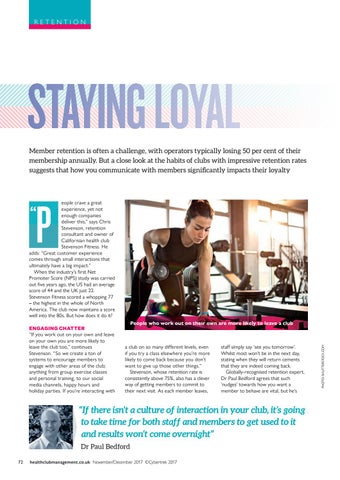 STAYING LOYAL Member retention is often a challenge, with operators typically losing 50 per cent of their membership annually. But a close look at the habits of clubs with impressive retention rates suggests that how you communicate with members significantly impacts their loyalty

eople crave a great experience, yet not enough companies deliver this,” says Chris Stevenson, retention consultant and owner of Californian health club Stevenson Fitness. He adds: “Great customer experience comes through small interactions that ultimately have a big impact.” When the industry’s first Net Promoter Score (NPS) study was carried out five years ago, the US had an average score of 44 and the UK just 22. Stevenson Fitness scored a whopping 77 – the highest in the whole of North America. The club now maintains a score well into the 80s. But how does it do it? People who work out on their own are more likely to leave a club

a club on so many different levels, even if you try a class elsewhere you’re more likely to come back because you don’t want to give up those other things.” Stevenson, whose retention rate is consistently above 75%, also has a clever way of getting members to commit to their next visit. As each member leaves,

staff simply say ‘see you tomorrow’. Whilst most won’t be in the next day, stating when they will return cements that they are indeed coming back. Globally-recognised retention expert, Dr Paul Bedford agrees that such ‘nudges’ towards how you want a member to behave are vital, but he’s

“If there isn’t a culture of interaction in your club, it’s going to take time for both staff and members to get used to it and results won’t come overnight” Dr Paul Bedford 72

ENGAGING CHATTER “If you work out on your own and leave on your own you are more likely to leave the club too,” continues Stevenson. “So we create a ton of systems to encourage members to engage with other areas of the club; anything from group exercise classes and personal training, to our social media channels, happy hours and holiday parties. If you’re interacting with