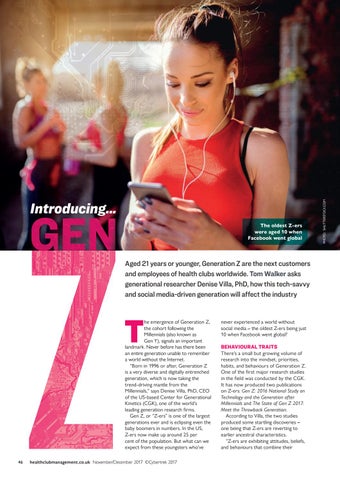 The oldest Z-ers were aged 10 when Facebook went global

Aged 21 years or younger, Generation Z are the next customers and employees of health clubs worldwide. Tom Walker asks generational researcher Denise Villa, PhD, how this tech-savvy and social media-driven generation will affect the industry

he emergence of Generation Z, the cohort following the Millennials (also known as Gen Y), signals an important landmark. Never before has there been an entire generation unable to remember a world without the Internet. “Born in 1996 or after, Generation Z is a very diverse and digitally entrenched generation, which is now taking the trend-driving mantle from the Millennials,” says Denise Villa, PhD, CEO of the US-based Center for Generational Kinetics (CGK), one of the world’s leading generation research firms. Gen Z, or “Z-ers” is one of the largest generations ever and is eclipsing even the baby boomers in numbers. In the US, Z-ers now make up around 25 per cent of the population. But what can we expect from these youngsters who’ve

never experienced a world without social media – the oldest Z-ers being just 10 when Facebook went global?

There&#39;s a small but growing volume of research into the mindset, priorities, habits, and behaviours of Generation Z. One of the first major research studies in the field was conducted by the CGK. It has now produced two publications on Z-ers: Gen Z: 2016 National Study on Technology and the Generation after Millennials and The State of Gen Z 2017: Meet the Throwback Generation. According to Villa, the two studies produced some startling discoveries – one being that Z-ers are reverting to earlier ancestral characteristics. “Z-ers are exhibiting attitudes, beliefs, and behaviours that combine their