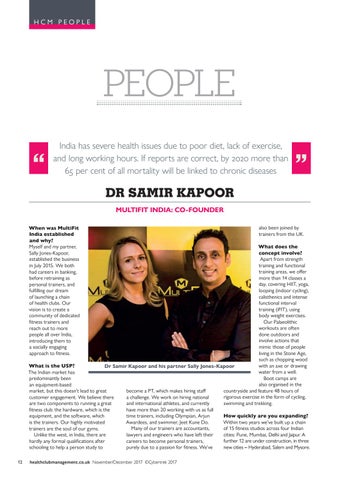 India has severe health issues due to poor diet, lack of exercise, and long working hours. If reports are correct, by 2020 more than 65 per cent of all mortality will be linked to chronic diseases

DR SAMIR KAPOOR MULTIFIT INDIA: CO-FOUNDER When was MultiFit India established and why? Myself and my partner, Sally Jones-Kapoor, established the business in July 2015. We both had careers in banking, before retraining as personal trainers, and fulfilling our dream of launching a chain of health clubs. Our vision is to create a community of dedicated fitness trainers and reach out to more people all over India, introducing them to a socially engaging approach to fitness.

also been joined by trainers from the UK.

What does the concept involve? Apart from strength training and functional training areas, we oﬀer more than 14 classes a day, covering HIIT, yoga, looping (indoor cycling), calisthenics and intense functional interval training (iFIT), using body weight exercises. Our Palaeolithic workouts are often done outdoors and involve actions that mimic those of people living in the Stone Age, such as chopping wood with an axe or drawing What is the USP? Dr Samir Kapoor and his partner Sally Jones-Kapoor water from a well. The Indian market has Boot camps are predominantly been also organised in the an equipment-based countryside and feature 48 hours of become a PT, which makes hiring staﬀ market, but this doesn’t lead to great rigorous exercise in the form of cycling, a challenge. We work on hiring national customer engagement. We believe there swimming and trekking. and international athletes, and currently are two components to running a great have more than 20 working with us as full fitness club: the hardware, which is the How quickly are you expanding? time trainers, including Olympian, Arjun equipment, and the software, which Within two years we’ve built up a chain Awardees, and swimmer, Jeet Kune Do. is the trainers. Our highly motivated of 15 fitness studios across four Indian Many of our trainers are accountants, trainers are the soul of our gyms. cities: Pune, Mumbai, Delhi and Jaipur. A lawyers and engineers who have left their Unlike the west, in India, there are further 12 are under construction, in three careers to become personal trainers, hardly any formal qualifications after new cities – Hyderabad, Salem and Mysore. purely due to a passion for fitness. We’ve schooling to help a person study to 12