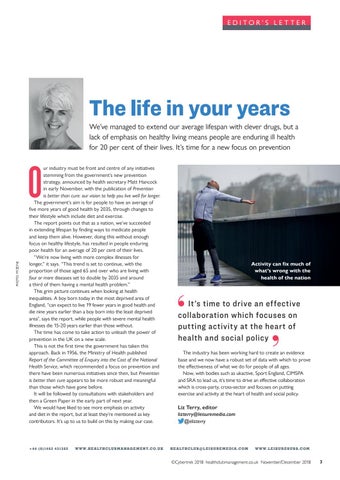 The life in your years

We’ve managed to extend our average lifespan with clever drugs, but a lack of emphasis on healthy living means people are enduring ill health for 20 per cent of their lives. It’s time for a new focus on prevention

ur industry must be front and centre of any initiatives stemming from the government’s new prevention strategy, announced by health secretary Matt Hancock in early November, with the publication of Prevention is better than cure: our vision to help you live well for longer. The government’s aim is for people to have an average of five more years of good health by 2035, through changes to their lifestyle which include diet and exercise. The report points out that as a nation, we’ve succeeded in extending lifespan by finding ways to medicate people and keep them alive. However, doing this without enough focus on healthy lifestyle, has resulted in people enduring poor health for an average of 20 per cent of their lives. “We’re now living with more complex illnesses for longer,” it says. “This trend is set to continue, with the proportion of those aged 65 and over who are living with four or more diseases set to double by 2035 and around a third of them having a mental health problem.” This grim picture continues when looking at health inequalities. A boy born today in the most deprived area of England, “can expect to live 19 fewer years in good health and die nine years earlier than a boy born into the least deprived area”, says the report, while people with severe mental health illnesses die 15-20 years earlier than those without. The time has come to take action to unleash the power of prevention in the UK on a new scale. This is not the first time the government has taken this approach. Back in 1956, the Ministry of Health published Report of the Committee of Enquiry into the Cost of the National Health Service, which recommended a focus on prevention and there have been numerous initiatives since then, but Prevention is better than cure appears to be more robust and meaningful than those which have gone before. It will be followed by consultations with stakeholders and then a Green Paper in the early part of next year. We would have liked to see more emphasis on activity and diet in the report, but at least they’re mentioned as key contributors. It’s up to us to build on this by making our case.