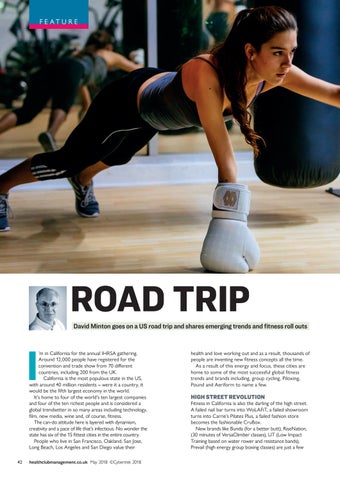 ’m in California for the annual IHRSA gathering. Around 12,000 people have registered for the convention and trade show from 70 diﬀerent countries, including 200 from the UK. California is the most populous state in the US, with around 40 million residents – were it a country, it would be the fifth largest economy in the world. It’s home to four of the world’s ten largest companies and four of the ten richest people and is considered a global trendsetter in so many areas including technology, film, new media, wine and, of course, fitness. The can-do attitude here is layered with dynamism, creativity and a pace of life that’s infectious. No wonder the state has six of the 15 fittest cities in the entire country. People who live in San Francisco, Oakland, San Jose, Long Beach, Los Angeles and San Diego value their

health and love working out and as a result, thousands of people are inventing new fitness concepts all the time. As a result of this energy and focus, these cities are home to some of the most successful global fi tness trends and brands including, group cycling, Piloxing, Pound and Aeriform to name a few.

Fitness in California is also the darling of the high street. A failed nail bar turns into WoLAFiT, a failed showroom turns into Carrie’s Pilates Plus, a failed fashion store becomes the fashionable CruBox. New brands like Bunda (for a better butt), RiseNation, (30 minutes of VersaClimber classes), LIT (Low Impact Training based on water rower and resistance bands), Prevail (high energy group boxing classes) are just a few