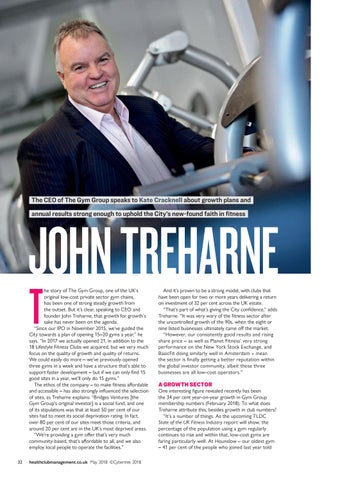 he story of The Gym Group, one of the UK’s original low-cost private sector gym chains, has been one of strong steady growth from the outset. But it’s clear, speaking to CEO and founder John Treharne, that growth for growth’s sake has never been on the agenda. “Since our IPO in November 2015, we’ve guided the City towards a plan of opening 15–20 gyms a year,” he says. “In 2017 we actually opened 21, in addition to the 18 Lifestyle Fitness Clubs we acquired, but we very much focus on the quality of growth and quality of returns. We could easily do more – we’ve previously opened three gyms in a week and have a structure that’s able to support faster development – but if we can only find 15 good sites in a year, we’ll only do 15 gyms.” The ethos of the company – to make fitness aﬀordable and accessible – has also strongly influenced the selection of sites, as Treharne explains: “Bridges Ventures [the Gym Group’s original investor] is a social fund, and one of its stipulations was that at least 50 per cent of our sites had to meet its social deprivation rating. In fact, over 80 per cent of our sites meet those criteria, and around 20 per cent are in the UK’s most deprived areas. “We’re providing a gym oﬀer that’s very much community-based, that’s aﬀordable to all, and we also employ local people to operate the facilities.”

And it’s proven to be a strong model, with clubs that have been open for two or more years delivering a return on investment of 32 per cent across the UK estate. “That’s part of what’s giving the City confidence,” adds Treharne. “It was very wary of the fitness sector after the uncontrolled growth of the 90s, when the eight or nine listed businesses ultimately came oﬀ the market. “However, our consistently good results and rising share price – as well as Planet Fitness’ very strong performance on the New York Stock Exchange, and BasicFit doing similarly well in Amsterdam – mean the sector is fi nally getting a better reputation within the global investor community, albeit these three businesses are all low-cost operators.”

One interesting figure revealed recently has been the 34 per cent year-on-year growth in Gym Group membership numbers (February 2018). To what does Treharne attribute this, besides growth in club numbers? “It’s a number of things. As the upcoming TLDC State of the UK Fitness Industry report will show, the percentage of the population using a gym regularly continues to rise and within that, low-cost gyms are faring particularly well. At Hounslow – our oldest gym – 41 per cent of the people who joined last year told