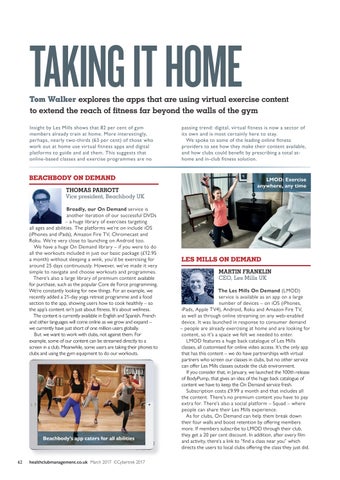 Insight by Les Mills shows that 82 per cent of gym members already train at home. More interestingly, perhaps, nearly two-thirds (63 per cent) of those who work out at home use virtual fitness apps and digital platforms to guide and aid them. This suggests that online-based classes and exercise programmes are no

BEACHBODY ON DEMAND THOMAS PARROTT Vice president, Beachbody UK Broadly, our On Demand service is another iteration of our successful DVDs – a huge library of exercises targeting all ages and abilities. The platforms we’re on include iOS (iPhones and iPads), Amazon Fire TV, Chromecast and Roku. We’re very close to launching on Android too. We have a huge On Demand library – if you were to do all the workouts included in just our basic package (£12.95 a month) without sleeping a wink, you’d be exercising for around 25 days continuously. However, we’ve made it very simple to navigate and choose workouts and programmes. There’s also a large library of premium content available for purchase, such as the popular Core de Force programming. We’re constantly looking for new things. For an example, we recently added a 21-day yoga retreat programme and a food section to the app, showing users how to cook healthily – so the app’s content isn’t just about fitness. It’s about wellness. The content is currently available in English and Spanish. French and other languages will come online as we grow and expand – we currently have just short of one million users globally. But we want to work with clubs, not against them. For example, some of our content can be streamed directly to a screen in a club. Meanwhile, some users are taking their phones to clubs and using the gym equipment to do our workouts.

Beachbody’s app caters for all abilities

passing trend: digital, virtual fitness is now a sector of its own and is most certainly here to stay. We spoke to some of the leading online fi tness providers to see how they make their content available, and how clubs could benefi t by prescribing a total athome and in-club fi tness solution.

LES MILLS ON DEMAND MARTIN FRANKLIN CEO, Les Mills UK The Les Mills On Demand (LMOD) service is available as an app on a large number of devices – on iOS (iPhones, iPads, Apple TV4), Android, Roku and Amazon Fire TV, as well as through online streaming on any web-enabled device. It was launched in response to consumer demand – people are already exercising at home and are looking for content, so it’s a space we felt we needed to enter. LMOD features a huge back catalogue of Les Mills classes, all customised for online video access. It’s the only app that has this content – we do have partnerships with virtual partners who screen our classes in clubs, but no other service can oﬀer Les Mills classes outside the club environment. If you consider that, in January, we launched the 100th release of BodyPump, that gives an idea of the huge back catalogue of content we have to keep the On Demand service fresh. Subscription costs £9.99 a month and that includes all the content. There’s no premium content you have to pay extra for. There’s also a social platform – Squad – where people can share their Les Mills experience. As for clubs, On Demand can help them break down their four walls and boost retention by oﬀering members more. If members subscribe to LMOD through their club, they get a 20 per cent discount. In addition, after every film and activity, there’s a link to “find a class near you” which directs the users to local clubs oﬀering the class they just did.