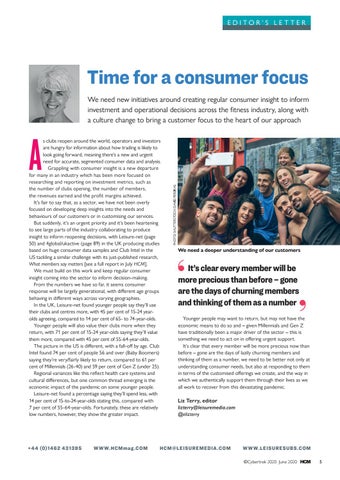 Time for a consumer focus We need new initiatives around creating regular consumer insight to inform investment and operational decisions across the fitness industry, along with a culture change to bring a customer focus to the heart of our approach

s clubs reopen around the world, operators and investors are hungry for information about how trading is likely to look going forward, meaning there’s a new and urgent need for accurate, segmented consumer data and analysis. Grappling with consumer insight is a new departure for many in an industry which has been more focused on researching and reporting on investment metrics, such as the number of clubs opening, the number of members, the revenues earned and the profi t margins achieved. It’s fair to say that, as a sector, we have not been overly focused on developing deep insights into the needs and behaviours of our customers or in customising our services. But suddenly, it’s an urgent priority and it’s been heartening to see large parts of the industry collaborating to produce insight to inform reopening decisions, with Leisure-net (page 50) and 4global/ukactive (page 89) in the UK producing studies based on huge consumer data samples and Club Intel in the US tackling a similar challenge with its just-published research, What members say matters [see a full report in July HCM]. We must build on this work and keep regular consumer insight coming into the sector to inform decision-making. From the numbers we have so far, it seems consumer response will be largely generational, with diﬀerent age groups behaving in diﬀerent ways across varying geographies. In the UK, Leisure-net found younger people say they’ll use their clubs and centres more, with 45 per cent of 15-24 yearolds agreeing, compared to 14 per cent of 65- to 74-year-olds. Younger people will also value their clubs more when they return, with 71 per cent of 15-24 year-olds saying they’ll value them more, compared with 45 per cent of 55-64-year-olds. The picture in the US is diﬀerent, with a fall-oﬀ by age. Club Intel found 74 per cent of people 56 and over (Baby Boomers) saying they’re very/fairly likely to return, compared to 61 per cent of Millennials (26-40) and 59 per cent of Gen Z (under 25). Regional variances like this reflect health care systems and cultural diﬀerences, but one common thread emerging is the economic impact of the pandemic on some younger people. Leisure-net found a percentage saying they’ll spend less, with 14 per cent of 15-to-24-year-olds stating this, compared with 7 per cent of 55-64-year-olds. Fortunately, these are relatively low numbers, however, they show the greater impact.

We need a deeper understanding of our customers