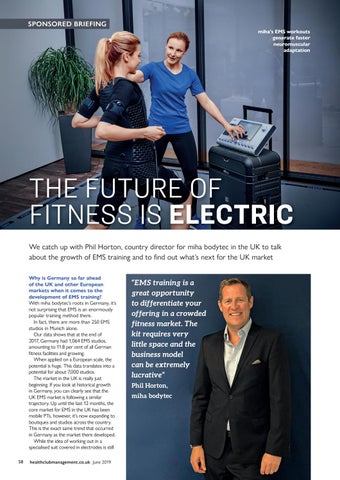 THE FUTURE OF FITNESS IS ELECTRIC We catch up with Phil Horton, country director for miha bodytec in the UK to talk about the growth of EMS training and to find out what’s next for the UK market Why is Germany so far ahead of the UK and other European markets when it comes to the development of EMS training? With miha bodytec’s roots in Germany, it’s not surprising that EMS is an enormously popular training method there. In fact, there are more than 250 EMS studios in Munich alone. Our data shows that at the end of 2017, Germany had 1,064 EMS studios, amounting to 11.8 per cent of all German fitness facilities and growing. When applied on a European scale, the potential is huge. This data translates into a potential for about 7,000 studios. The market in the UK is really just beginning. If you look at historical growth in Germany, you can clearly see that the UK EMS market is following a similar trajectory. Up until the last 12 months, the core market for EMS in the UK has been mobile PTs, however, it’s now expanding to boutiques and studios across the country. This is the exact same trend that occurred in Germany as the market there developed. While the idea of working out in a specialised suit covered in electrodes is still 58

“EMS training is a great opportunity to differentiate your offering in a crowded fitness market. The kit requires very little space and the business model can be extremely lucrative” Phil Horton, miha bodytec