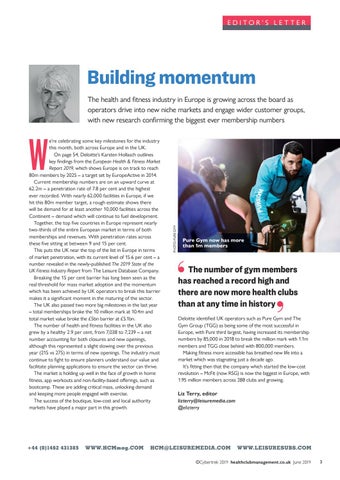 Building momentum The health and fitness industry in Europe is growing across the board as operators drive into new niche markets and engage wider customer groups, with new research confirming the biggest ever membership numbers

e’re celebrating some key milestones for the industry this month, both across Europe and in the UK. On page 54, Deloitte’s Karsten Hollasch outlines key findings from the European Health &amp; Fitness Market Report 2019, which shows Europe is on track to reach 80m members by 2025 – a target set by EuropeActive in 2014. Current membership numbers are on an upward curve at 62.2m – a penetration rate of 7.8 per cent and the highest ever recorded. With nearly 62,000 facilities in Europe, if we hit this 80m member target, a rough estimate shows there will be demand for at least another 10,000 facilities across the Continent – demand which will continue to fuel development. Together, the top five countries in Europe represent nearly two-thirds of the entire European market in terms of both memberships and revenues. With penetration rates across these five sitting at between 9 and 15 per cent. This puts the UK near the top of the list in Europe in terms of market penetration, with its current level of 15.6 per cent – a number revealed in the newly-published The 2019 State of the UK Fitness Industry Report from The Leisure Database Company. Breaking the 15 per cent barrier has long been seen as the real threshold for mass market adoption and the momentum which has been achieved by UK operators to break this barrier makes it a significant moment in the maturing of the sector. The UK also passed two more big milestones in the last year – total memberships broke the 10 million mark at 10.4m and total market value broke the £5bn barrier at £5.1bn. The number of health and fitness facilities in the UK also grew by a healthy 2.9 per cent, from 7,038 to 7,239 – a net number accounting for both closures and new openings, although this represented a slight slowing over the previous year (215 vs 275) in terms of new openings. The industry must continue to fight to ensure planners understand our value and facilitate planning applications to ensure the sector can thrive. The market is holding up well in the face of growth in home fitness, app workouts and non-facility-based oﬀerings, such as bootcamp. These are adding critical mass, unlocking demand and keeping more people engaged with exercise. The success of the boutique, low-cost and local authority markets have played a major part in this growth.

The number of gym members has reached a record high and there are now more health clubs than at any time in history Deloitte identified UK operators such as Pure Gym and The Gym Group (TGG) as being some of the most successful in Europe, with Pure third largest, having increased its membership numbers by 85,000 in 2018 to break the million mark with 1.1m members and TGG close behind with 800,000 members. Making fitness more accessible has breathed new life into a market which was stagnating just a decade ago. It’s fitting then that the company which started the low-cost revolution – McFit (now RSG) is now the biggest in Europe, with 1.95 million members across 288 clubs and growing.