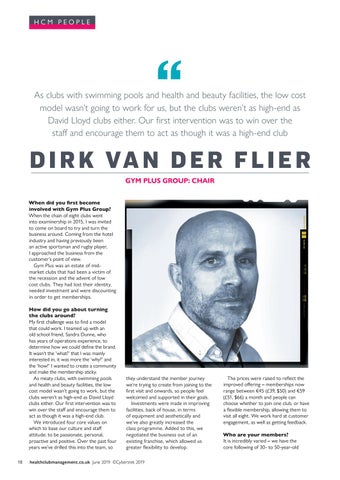 As clubs with swimming pools and health and beauty facilities, the low cost model wasn’t going to work for us, but the clubs weren’t as high-end as David Lloyd clubs either. Our first intervention was to win over the staﬀ and encourage them to act as though it was a high-end club

D I R K VA N D E R F L I E R GYM PLUS GROUP: CHAIR When did you first become involved with Gym Plus Group? When the chain of eight clubs went into examinership in 2015, I was invited to come on board to try and turn the business around. Coming from the hotel industry and having previously been an active sportsman and rugby player, I approached the business from the customer’s point of view. Gym Plus was an estate of midmarket clubs that had been a victim of the recession and the advent of low cost clubs. They had lost their identity, needed investment and were discounting in order to get memberships. How did you go about turning the clubs around? My first challenge was to find a model that could work. I teamed up with an old school friend, Sandra Dunne, who has years of operations experience, to determine how we could define the brand. It wasn’t the ‘what?’ that I was mainly interested in, it was more the ‘why?’ and the ‘how?’ I wanted to create a community and make the membership sticky. As meaty clubs, with swimming pools and health and beauty facilities, the low cost model wasn’t going to work, but the clubs weren’t as high-end as David Lloyd clubs either. Our first intervention was to win over the staﬀ and encourage them to act as though it was a high-end club. We introduced four core values on which to base our culture and staﬀ attitude: to be passionate, personal, proactive and positive. Over the past four years we’ve drilled this into the team, so 18

they understand the member journey we’re trying to create from joining to the first visit and onwards, so people feel welcomed and supported in their goals. Investments were made in improving facilities, back of house, in terms of equipment and aesthetically and we’ve also greatly increased the class programme. Added to this, we negotiated the business out of an existing franchise, which allowed us greater flexibility to develop.

The prices were raised to reflect the improved oﬀering – memberships now range between €45 (£39, $50) and €59 (£51, $66) a month and people can choose whether to join one club, or have a flexible membership, allowing them to visit all eight. We work hard at customer engagement, as well as getting feedback. Who are your members? It is incredibly varied – we have the core following of 30- to 50-year-old