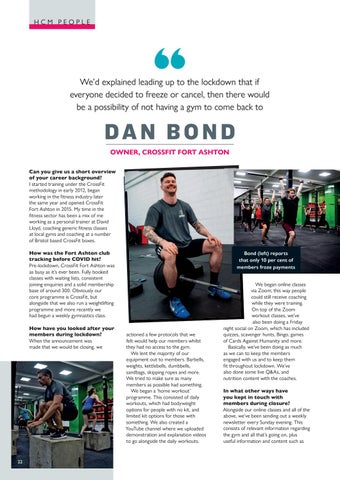 We’d explained leading up to the lockdown that if everyone decided to freeze or cancel, then there would be a possibility of not having a gym to come back to

DAN BOND OWNER, CROSSFIT FORT ASHTON Can you give us a short overview of your career background? I started training under the CrossFit methodology in early 2012, began working in the fitness industry later the same year and opened CrossFit Fort Ashton in 2015. My time in the fitness sector has been a mix of me working as a personal trainer at David Lloyd, coaching generic fitness classes at local gyms and coaching at a number of Bristol based CrossFit boxes. How was the Fort Ashton club tracking before COVID hit? Pre-lockdown, CrossFit Fort Ashton was as busy as it’s ever been. Fully booked classes with waiting lists, consistent joining enquiries and a solid membership base of around 300. Obviously our core programme is CrossFit, but alongside that we also run a weightlifting programme and more recently we had begun a weekly gymnastics class. How have you looked after your members during lockdown? When the announcement was made that we would be closing, we

actioned a few protocols that we felt would help our members whilst they had no access to the gym. We lent the majority of our equipment out to members. Barbells, weights, kettlebells, dumbbells, sandbags, skipping ropes and more. We tried to make sure as many members as possible had something. We began a ‘home workout’ programme. This consisted of daily workouts, which had bodyweight options for people with no kit, and limited kit options for those with something. We also created a YouTube channel where we uploaded demonstration and explanation videos to go alongside the daily workouts.

We began online classes via Zoom; this way people could still receive coaching while they were training. On top of the Zoom workout classes, we’ve also been doing a Friday night social on Zoom, which has included quizzes, scavenger hunts, Bingo, games of Cards Against Humanity and more. Basically, we’ve been doing as much as we can to keep the members engaged with us and to keep them fit throughout lockdown. We’ve also done some live Q&As, and nutrition content with the coaches. In what other ways have you kept in touch with members during closure? Alongside our online classes and all of the above, we’ve been sending out a weekly newsletter every Sunday evening. This consists of relevant information regarding the gym and all that’s going on, plus useful information and content such as