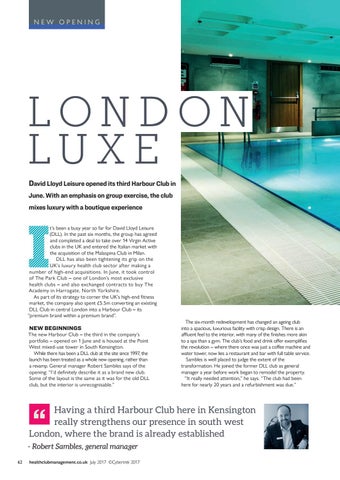 LONDON LUXE David Lloyd Leisure opened its third Harbour Club in June. With an emphasis on group exercise, the club mixes luxury with a boutique experience

t’s been a busy year so far for David Lloyd Leisure (DLL). In the past six months, the group has agreed and completed a deal to take over 14 Virgin Active clubs in the UK and entered the Italian market with the acquisition of the Malaspina Club in Milan. DLL has also been tightening its grip on the UK’s luxury health club sector after making a number of high-end acquisitions. In June, it took control of The Park Club – one of London’s most exclusive health clubs – and also exchanged contracts to buy The Academy in Harrogate, North Yorkshire. As part of its strategy to corner the UK’s high-end fitness market, the company also spent £5.5m converting an existing DLL Club in central London into a Harbour Club – its “premium brand within a premium brand”.

The new Harbour Club – the third in the company’s portfolio – opened on 1 June and is housed at the Point West mixed-use tower in South Kensington. While there has been a DLL club at the site since 1997, the launch has been treated as a whole new opening, rather than a revamp. General manager Robert Sambles says of the opening: “I’d definitely describe it as a brand new club. Some of the layout is the same as it was for the old DLL club, but the interior is unrecognisable.”

The six-month redevelopment has changed an ageing club into a spacious, luxurious facility with crisp design. There is an aﬄuent feel to the interior, with many of the finishes more akin to a spa than a gym. The club’s food and drink oﬀer exemplifies the revolution – where there once was just a coﬀee machine and water tower, now lies a restaurant and bar with full table service. Sambles is well placed to judge the extent of the transformation. He joined the former DLL club as general manager a year before work began to remodel the property. “It really needed attention,” he says. “The club had been here for nearly 20 years and a refurbishment was due.”

Having a third Harbour Club here in Kensington really strengthens our presence in south west London, where the brand is already established - Robert Sambles, general manager 62