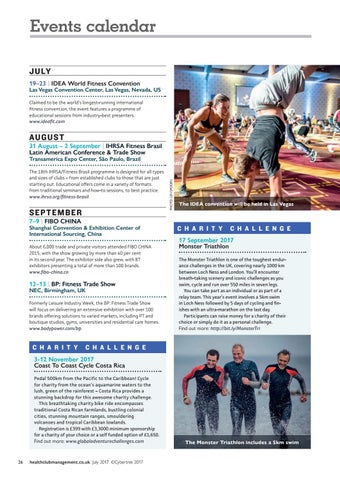 31 August – 2 September | IHRSA Fitness Brasil Latin American Conference &amp; Trade Show The 18th IHRSA/Fitness Brasil programme is designed for all types and sizes of clubs – from established clubs to those that are just starting out. Educational offers come in a variety of formats: from traditional seminars and how-to sessions, to best practice.

Shanghai Convention &amp; Exhibition Center of International Sourcing, China About 6,000 trade and private visitors attended FIBO CHINA 2015, with the show growing by more than 40 per cent in its second year. The exhibitor side also grew, with 87 exhibitors presenting a total of more than 100 brands.

The IDEA convention will be held in Las Vegas

The Monster Triathlon is one of the toughest endurance challenges in the UK, covering nearly 1000 km between Loch Ness and London. You’ll encounter breath-taking scenery and iconic challenges as you swim, cycle and run over 550 miles in seven legs. You can take part as an individual or as part of a relay team. This year’s event involves a 5km swim in Loch Ness followed by 5 days of cycling and finishes with an ultra-marathon on the last day. Participants can raise money for a charity of their choice or simply do it as a personal challenge.

3-12 November 2017 Coast To Coast Cycle Costa Rica Pedal 500km from the Pacific to the Caribbean! Cycle for charity from the ocean’s aquamarine waters to the lush, green of the rainforest – Costa Rica provides a stunning backdrop for this awesome charity challenge. This breathtaking charity bike ride encompasses traditional Costa Rican farmlands, bustling colonial cities, stunning mountain ranges, smouldering volcanoes and tropical Caribbean lowlands. Registration is £399 with £3,3000 minimum sponsorship for a charity of your choice or a self funded option of £1,650.