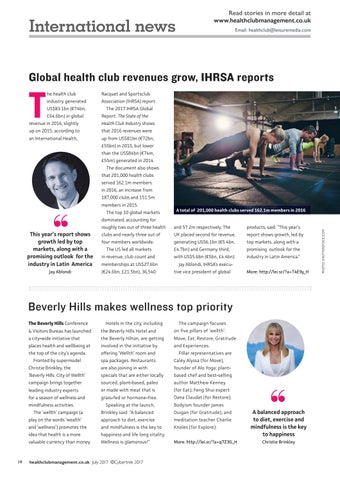 The 2017 IHRSA Global Report: The State of the

This year’s report shows growth led by top markets, along with a promising outlook for the industry in Latin America Jay Ablondi

and 57.2m respectively. The

clubs and nearly three out of

top markets, along with a

promising outlook for the

in revenue, club count and

The US led all markets

the Beverly Hills Hotel and

on five pillars of ‘wellth’:

a city-wide initiative that

the Beverly Hilton, are getting

places health and wellbeing at

involved in the initiative by

the top of the city’s agenda.

are also joining in with

specials that are either locally

based chef and best-selling

or made with meat that is

for a season of wellness and

Hotels in the city, including

Speaking at the launch,

The ‘wellth’ campaign (a

play on the words ‘wealth’

and ‘wellness’) promotes the

and mindfulness is the key to

idea that health is a more

A balanced approach to diet, exercise and mindfulness is the key to happiness Christie Brinkley

dominated, accounting for roughly two out of three health