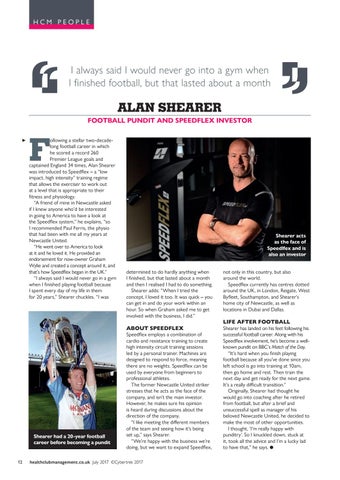 I always said I would never go into a gym when I finished football, but that lasted about a month

ollowing a stellar two-decadelong football career in which he scored a record 260 Premier League goals and captained England 34 times, Alan Shearer was introduced to Speedflex – a “low impact, high intensity” training regime that allows the exerciser to work out at a level that is appropriate to their fitness and physiology. “A friend of mine in Newcastle asked if I knew anyone who’d be interested in going to America to have a look at the Speedflex system,” he explains, “so I recommended Paul Ferris, the physio that had been with me all my years at Newcastle United. “He went over to America to look at it and he loved it. He provided an endorsement for now-owner Graham Wylie and created a concept around it, and that’s how Speedflex began in the UK.” “I always said I would never go in a gym when I finished playing football because I spent every day of my life in them for 20 years,” Shearer chuckles. “I was

Shearer had a 20-year football career before becoming a pundit

Shearer acts as the face of Speedlfex and is also an investor determined to do hardly anything when I finished, but that lasted about a month and then I realised I had to do something. Shearer adds: “When I tried the concept, I loved it too. It was quick – you can get in and do your work within an hour. So when Graham asked me to get involved with the business, I did.”

not only in this country, but also around the world. Speedflex currently has centres dotted around the UK, in London, Reigate, West Byfleet, Southampton, and Shearer’s home city of Newcastle, as well as locations in Dubai and Dallas.

Shearer has landed on his feet following his successful football career. Along with his Speedflex involvement, he’s become a wellknown pundit on BBC’s Match of the Day. “It’s hard when you finish playing football because all you’ve done since you left school is go into training at 10am, then go home and rest. Then train the next day and get ready for the next game. It’s a really diﬃcult transition.” Originally, Shearer had thought he would go into coaching after he retired from football, but after a brief and unsuccessful spell as manager of his beloved Newcastle United, he decided to make the most of other opportunities. I thought, ‘I’m really happy with punditry’. So I knuckled down, stuck at it, took all the advice and I’m a lucky lad to have that,” he says. ●

Speedflex employs a combination of cardio and resistance training to create high intensity circuit training sessions led by a personal trainer. Machines are designed to respond to force, meaning there are no weights. Speedflex can be used by everyone from beginners to professional athletes. The former Newcastle United striker stresses that he acts as the face of the company, and isn’t the main investor. However, he makes sure his opinion is heard during discussions about the direction of the company. “I like meeting the diﬀerent members of the team and seeing how it’s being set up,” says Shearer. “We’re happy with the business we’re doing, but we want to expand Speedflex,