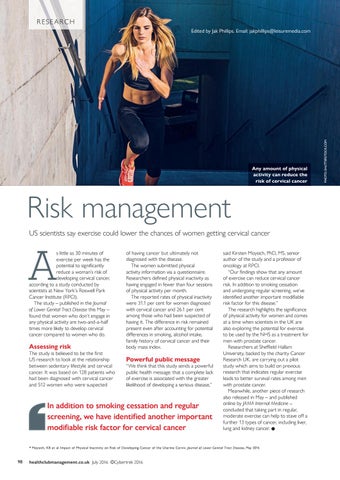 s little as 30 minutes of exercise per week has the potential to significantly reduce a woman’s risk of developing cervical cancer, according to a study conducted by scientists at New York’s Roswell Park Cancer Institute (RPCI). The study – published in the Journal of Lower Genital Tract Disease this May – found that women who don’t engage in any physical activity are two-and-a-half times more likely to develop cervical cancer compared to women who do.

The study is believed to be the first US research to look at the relationship between sedentary lifestyle and cervical cancer. It was based on 128 patients who had been diagnosed with cervical cancer and 512 women who were suspected

of having cancer but ultimately not diagnosed with the disease. The women submitted physical activity information via a questionnaire. Researchers defined physical inactivity as having engaged in fewer than four sessions of physical activity per month. The reported rates of physical inactivity were 31.1 per cent for women diagnosed with cervical cancer and 26.1 per cent among those who had been suspected of having it. The difference in risk remained present even after accounting for potential differences in smoking, alcohol intake, family history of cervical cancer and their body mass index.

“We think that this study sends a powerful public health message: that a complete lack of exercise is associated with the greater likelihood of developing a serious disease,”

In addition to smoking cessation and regular screening, we have identified another important modifiable risk factor for cervical cancer

said Kirsten Moysich, PhD, MS, senior author of the study and a professor of oncology at RPCI. “Our findings show that any amount of exercise can reduce cervical cancer risk. In addition to smoking cessation and undergoing regular screening, we’ve identified another important modifiable risk factor for this disease.” The research highlights the significance of physical activity for women and comes at a time when scientists in the UK are also exploring the potential for exercise to be used by the NHS as a treatment for men with prostate cancer. Researchers at Sheffield Hallam University, backed by the charity Cancer Research UK, are carrying out a pilot study which aims to build on previous research that indicates regular exercise leads to better survival rates among men with prostate cancer. Meanwhile, another piece of research also released in May – and published online by JAMA Internal Medicine – concluded that taking part in regular, moderate exercise can help to stave off a further 13 types of cancer, including liver, lung and kidney cancer. ●