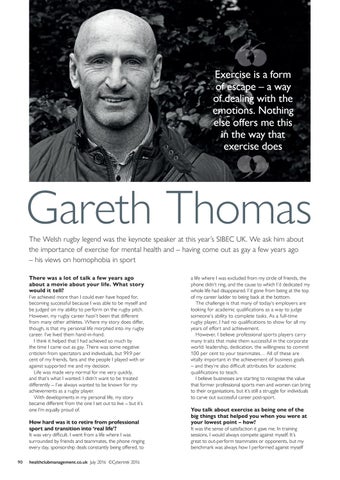 Exercise is a form of escape – a way of dealing with the emotions. Nothing else oﬀers me this in the way that exercise does

Gareth Thomas The Welsh rugby legend was the keynote speaker at this year’s SIBEC UK. We ask him about the importance of exercise for mental health and – having come out as gay a few years ago – his views on homophobia in sport

There was a lot of talk a few years ago about a movie about your life. What story would it tell?

I’ve achieved more than I could ever have hoped for, becoming successful because I was able to be myself and be judged on my ability to perform on the rugby pitch. However, my rugby career hasn’t been that diﬀerent from many other athletes. Where my story does diﬀer, though, is that my personal life morphed into my rugby career. I’ve lived them hand-in-hand. I think it helped that I had achieved so much by the time I came out as gay. There was some negative criticism from spectators and individuals, but 99.9 per cent of my friends, fans and the people I played with or against supported me and my decision. Life was made very normal for me very quickly, and that’s what I wanted. I didn’t want to be treated diﬀerently – I’ve always wanted to be known for my achievements as a rugby player. With developments in my personal life, my story became diﬀerent from the one I set out to live – but it’s one I’m equally proud of.

How hard was it to retire from professional sport and transition into ‘real life’?

It was very diﬃcult. I went from a life where I was surrounded by friends and teammates, the phone ringing every day, sponsorship deals constantly being oﬀered, to 90

a life where I was excluded from my circle of friends, the phone didn’t ring, and the cause to which I’d dedicated my whole life had disappeared. I’d gone from being at the top of my career ladder to being back at the bottom. The challenge is that many of today’s employers are looking for academic qualifi cations as a way to judge someone’s ability to complete tasks. As a full-time rugby player, I had no qualifi cations to show for all my years of eﬀort and achievement. However, I believe professional sports players carry many traits that make them successful in the corporate world: leadership, dedication, the willingness to commit 100 per cent to your teammates… All of these are vitally important in the achievement of business goals – and they’re also diﬃ cult attributes for academic qualifi cations to teach. I believe businesses are starting to recognise the value that former professional sports men and women can bring to their organisations, but it’s still a struggle for individuals to carve out successful career post-sport.

You talk about exercise as being one of the big things that helped you when you were at your lowest point – how? It was the sense of satisfaction it gave me. In training sessions, I would always compete against myself. It’s great to out-perform teammates or opponents, but my benchmark was always how I performed against myself